Published on November 8, 2016 at 5:40 am by Geeta Sharma in Hedge Fund Analysis, Hedge Funds, News

Our data culled from the 659 funds in our database which filed 13Fs for the June quarter, and whose portfolios contained at least 5 long positions in companies valued at $1 billion, revealed some startling statistics. Foremost was the fact that an impressive 95% of them delivered positive stock returns with those long positions during the third quarter based on our methodology. In comparison, S&P 500 ETFs returned just 3.3% during the quarter, so that high a percentage of funds posting gains is a noteworthy feat. However, what we don’t see in 13F filings are hedge funds’ holdings that don’t necessarily do as well: the short-side of their portfolios, as well as their low-yield debt positions. Couple that with demanding fees, and you can see why hedge funds consistently underperform the market net of fees, despite being quality stock pickers. That’s why at Insider Monkey, we analyze only the top stock picks of the top hedge funds, to cut through the fees and underperformance. In this article, we’ll take a look at the performance of Tiger Global Management and four of its favorite stocks.

Founded by Chase Coleman in 2001, Tiger Global manages a public equity portfolio valued at $5.06 billion at the end of June, down from $6.93 billion a quarter earlier. The fund invests almost primarily in consumer stocks, which accounted for 81% of the value of its public equity portfolio’s holdings on June 30. Those stocks (and the fund’s others) enjoyed a strong Q3 according to our calculations, which show that its 17 positions in companies valued at $1 billion or more on June 30 delivered weighted average returns of 19.4% during the third quarter, ranking it as the top Tiger fund and pushing its year-to-date gains into positive territory after a tough first-half. It should be noted that our calculations may be different from the fund’s actual returns, as they do not factor in changes to positions during the quarter, or positions that don’t get reported on Form 13Fs, like short positions.

Now then, let’s take a look at Tiger Global’s top picks on June 30 and see how they performed in the third-quarter.

First up is Amazon.com, Inc. (NASDAQ:AMZN), the fund’s top pick at the end of June. Tiger Global owned a $1.05 billion position in the stock at that time, consisting of 1.46 million shares, up by 41% since the end of March. Amazon posted a big quarter, gaining 17%, though shares have slumped in the fourth-quarter following lighter-than-expected earnings. Amazon’s Twitch game streaming service is preparing to roll out ad-block busting technology that the company believes will make it much harder for viewers to bypass video ads. 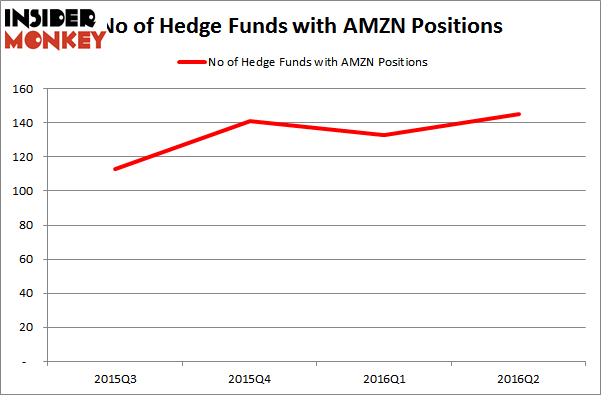 At Q2’s end, a total of 145 of the hedge funds tracked by Insider Monkey were long this stock, a 9% rise from the end of the first quarter of 2016, and pushing it to its highest ever level in terms of hedge fund ownership among the funds in our database. The largest stake in Amazon.com, Inc. (NASDAQ:AMZN) was held by Viking Global, which reported holding $2.35 billion worth of stock as of the end of June. It was followed by Fisher Asset Management with a $1.50 billion position. Other investors bullish on the company included Lansdowne Partners, Eagle Capital Management, and Lone Pine Capital.

Next up is Charter Communications, Inc. (NASDAQ:CHTR), in which Tiger Global owned 4.25 million shares worth over $972 million of at the end of June, which accounted for a hefty 19.21% of the value of the fund’s public equity portfolio. After increasing its stake in Charter Communications, Inc. (NASDAQ:CHTR) by 181% during the first quarter, Tiger Global boosted it by a further 116% during the second quarter. Shares of the company gained 13% during Q3, but have also slumped in the fourth-quarter.

At the end of the second quarter, a total of 134 of the hedge funds tracked by Insider Monkey were bullish on this stock, a 37% jump from one quarter earlier. When looking at the institutional investors followed by Insider Monkey, Berkshire Hathaway, managed by Warren Buffett, holds the most valuable position in Charter Communications, Inc. (NASDAQ:CHTR) ($2.13 billion position). The second-most bullish fund manager is Lone Pine Capital, managed by Stephen Mandel ($1.10 billion position). Remaining peers that are bullish encompass Eric W. Mandelblatt’s Soroban Capital Partners and John Armitage’s Egerton Capital Limited.

We’ll check out two more of Chase Coleman’s favorite stocks on the next page.