Joho Capital was founded in 1996 by Robert Karr, a Tiger Cub, who perfected his stock-picking skills during his four-year employment at Julian Robertson’s Tiger Management. At the end of June, Joho Capital held an equity portfolio worth $367.29 million, which was concentrated in a relatively small-number of stocks, the majority of which are from the technology and industrial sector.

According to our calculations, which take into account Joho’s investments in companies worth over $1.0 billion as of the end of June, the fund had a return of 26% during the third quarter, mainly from its investments in GrubHub Inc (NYSE:GRUB) and Alibaba Group Holding Ltd (NYSE:BABA), which together amassed over a half of its 13F portfolio. Even though, our way of measuring the fund’s performance provide only an approximate result, it still can give us an idea whether or not it’s worth following Joho Capital and mimicking some of its picks.

With this in mind, let’s take a look at four tech stocks in which Joho held the largest stakes heading into the third quarter.

In GrubHub Inc (NYSE:GRUB), Joho reported ownership of 3.44 million shares valued at $106.75 million as of the end of June; the holding was cut by 9% during the second quarter. The stock advanced by 38.4% in the third quarter and are up by over 53% since the beginning of the year. Overall, heading into the third quarter of 2016, a total of 25 of the hedge funds tracked by Insider Monkey were bullish on this stock, a change of 9% from the previous quarter. The largest stake in GrubHub Inc (NYSE:GRUB) was held by Ross Turner’s Pelham Capital, which reported a stake worth close to $179.1 million, accounting for 85.1% of its total 13F portfolio as of the end of June. Coming in second was Paul Reeder and Edward Shapiro’s PAR Capital Management,  which held a $169.5 million position. Moreover, Melvin Capital Management, led by Gabriel Plotkin, initiated the biggest position in GrubHub Inc (NYSE:GRUB) and had $27.2 million invested in the company at the end of the quarter. 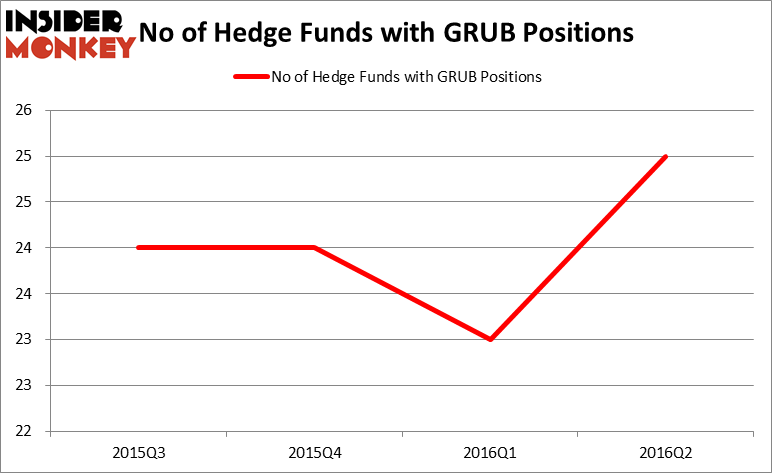