We have all heard the saying, “Buy low, sell high,” but the mystery still remains as to what that “high” or “low” really is. That’s something that people could argue to their grave, but we will likely never know the answer until we see the results through a pair of spectacles known as hindsight. These next few companies have all increased by impressive amounts YTD, but will they continue in that direction long-term? 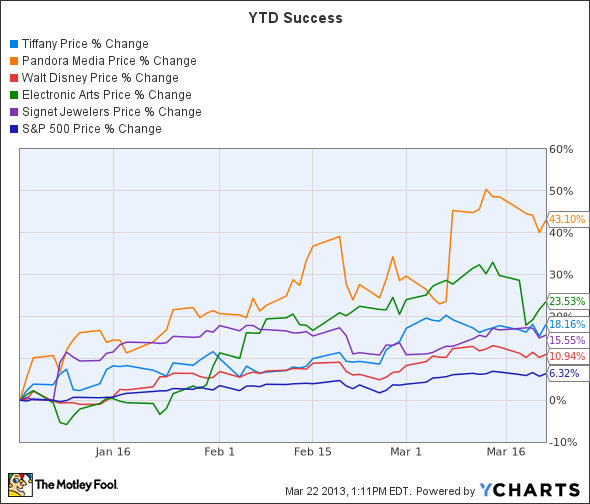 As you can see, most of these companies have more than doubled the S&P 500 so far this year. Tiffany & Co. (NYSE:TIF) is a company that has firsthand knowledge of the ups and downs of the market. It was founded in September of 1837 and went public in 1987. With a market cap of $8.8 billion, the company has seen revenues increase eight of the past ten years for a total of 213%. In 2012, the stock was down nearly 12%, and it currently shows a P/E of 21.  Its free cash flow (FCF) yield of .4% doesn’t seem very appealing for bargain investors. Growth investors may find Tiffany slightly more appealing, however I wouldn’t expect to see growth like we have so far in 2013 continue for long.

Signet Jewelers Ltd. (NYSE:SIG) jewelers shows very similar revenues to those of Tiffany & Co. (NYSE:TIF), however its market cap is $3.8 billion smaller. The last time the stock decreased over the period of a year was in 2008 when it lost 68.92%. Since 2003 Signet’s revenues and FCF have increased approximately 42% and 234%, while its gross margins have increased from 17.2 to 38.3. It’s always good to see three metrics increase over time. Although its P/E could be lower, it’s a solid 15.1; the forward P/E is 13.8; and its 3.7% FCF yield offers a much better bargain than its competitor. With a fair P/E, a reasonably average FCF yield, and revenues increasing consistently, I would be much more likely to invest in a company like Signet than Tiffany.