Three Reasons to Worry and One Theme That Can Outperform: Life Technologies Corp. (LIFE) and More

Occasionally some of my friends ask me why I am hedged and market neutral in my investing. My answer is always the same. I invest for the long term, and the macro-environment remains very dangerous right now. I am confident in my ability to pick a portfolio that can outperform the market, but I can’t predict what is going to happen in the global economy, and the evidence is that the key players are not dealing with the problems at hand. Moreover, trends in economics and society are severely threatening the West’s future prosperity. With this in mind I thought I would outline the reasons why and then suggest a sector likely to outperform.

The lessons of the last recession are still not properly being learned. In fact, I don’t think they ever will be because the causes of it are so deeply ingrained into the nature of capital markets that they will inevitably repeat themselves in the future.

However, some things have changed. For the sake of brevity I will mention three things.

First, take a look at the following chart. This is data sourced from the IMF that outlines government debt/GDP.  The shaded areas represent recessions. 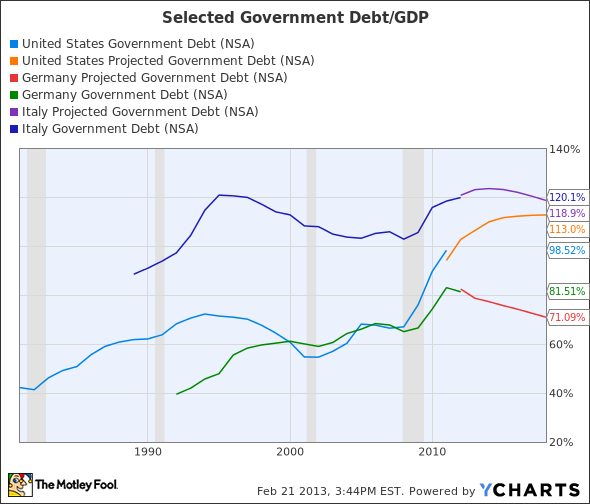 My point here is that whenever the US entered previous recessions it always had the leeway to raise government spending (and consequently debt) in order to counteract the cyclical slowdown in the private sector. So what happens if there is another recession in the near future? The US Government  (actually the US taxpayer) does not appear to be in a strong position to deal with it. In addition, borrowing rates are likely to be much higher, and if history is a guide then the cyclicality of the next recession is likely to increase thanks to globalization synchronizing the global economy.

Second, I don’t like the structural nature of unemployment in the cycle. Don’t get me wrong, I’m a great believer in the idea that employment will pick up this year but we need to put this into context.

Here is a chart that does that. This represents the percentage of jobs regained from those lost in the previous recessions . All data is non-farm payroll from the BLS.

Note how weak the current recovery is with only 62.7% of the jobs lost now regained, and these numbers do not include assumptions for new entrants into the labor market. Furthermore, note how with each recession it takes progressively longer to regain jobs.

The US has structural unemployment issues, and this is placing a burden on public finances and also on the way of life that post-War America came to understand as normal.

The third issue is demographics. I’m going to lean on Charles Murray’s Coming Apart and highlight the differentials in marriage and divorce rates between poorer and wealthier segments of America. Things appear to be okay at the top, but marriage rates have imploded at the bottom while single parenthood rates have exploded at the same time. I’m aware these subjects are contentious but allow me a few brief words.

The great Aristotelian religions (Judaism, Christianity and Islam) survived and became so, because at the heart of them lies the nuclear family and respect for private property. I argue that we have never before been in an economic environment where the nuclear family has faced such a sustained onslaught from social commentators, sociologists, the media, divorce courts, and good old fashioned social engineering ‘do-gooders’ fixated on the idea of restructuring gender relations. You don’t have to agree with me on the causes (I stress feminism causing social pressure against marriage), but it is indisputable that the nuclear family is breaking down in America, and this is unchartered territory for the economy.