As expected, Nokia Corporation (ADR) (NYSE:NOK)‘s sales, revenue, and income dropped in its recently announced Q1, both sequentially, and compared to last year. And, based on market reaction, it’s going to be a long day for Nokia shareholders — or, at least, those with a near-term perspective. For Fools with a longer-term view, a Nokia sell-off may turn out to be a great buying opportunity.

The results are in 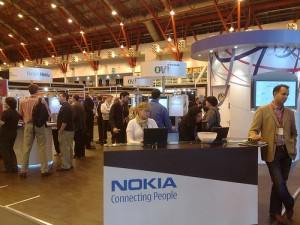 Nokia’s net loss of $0.09 a share was a marked improvement compared to the year-ago quarter’s loss, but fell well short of Q4 2012’s $0.07 a share profit. Overall, net sales really took a beating; down 20% from last year, and 27% from Nokia’s Q4 revenues of $10.48 billion. Nokia bears are sure to focus on sales and sinking profits after they digest the earnings news. But there’s more to Nokia’s quarter than meets the eye.

Non-IFRS results in Q1 showed underlying profitability as a whole, and in Nokia’s critical Devices unit, which includes the all-important Lumia smartphone. Though revenues were down, Nokia CEO Stephen Elop’s efforts to reduce expenses are beginning to take hold, which drove another quarter of profit.

Nokia’s future is riding on the Lumia smartphone and Microsoft Corporation (NASDAQ:MSFT)‘s Windows 8 OS. Compared to Apple Inc. (NASDAQ:AAPL)‘s iOS and Google Inc (NASDAQ:GOOG)‘s Android market share, widespread adoption of Windows 8 leaves much to be desired. But, as noted in a recent article, if a smartphone that runs Windows 8 is sold anywhere in the world, there’s an 80% chance it’s a Nokia. Clearly, it behooves Microsoft Corporation (NASDAQ:MSFT) to support Nokia smartphone sales any way it can as the two work to gain market share. There are worse friends to have than deep- pocketed Microsoft, which reported $68 billion in cash ahead of the fiscal Q3 results it will announce after today’s close.