I am always on the lookout for stocks I can hold for the long haul because they are so valuable, I cannot afford to let them go. The first thing I look for is a company in a segment with strong demand during good times and bad. This means I won’t have to worry about economic events that could negatively affect the markets.

And when it comes to demand resilience, pharmaceutical stocks are the first to come to mind — especially the ones that produce drugs that fight life-threatening diseases and keep people alive. Even during hard times, people dependent on these drugs won’t cut back.

Diabetes is one of those deadly diseases that have been on the rise with a huge patient pool. Diabetes health care costs in the United States could reach more than $170 billion annually, according to estimates by the Centers for Disease Control and Prevention. Complications from the disease can include heart disease, stroke, high blood pressure, blindness, limb amputation, kidney disease and ultimately death.
It’s estimated that nearly 26 million children and adults in the United States have diabetes, while only 18.8 million have been diagnosed. There are an additional 79 million people who have pre-diabetes, many of which will develop Type 2 diabetes or experience certain symptoms of the disease at some point in their lives. Worldwide, there are more than 366 million people living with diabetes but only about half of them have been diagnosed.

The prevalence of diabetes is expected to soar in the coming decades as a result of an increasinglyoverweight and aging population. These demographic trends are further strengthened by a market shift toward modern insulin analogs, which offer improved efficacy, safety and convenience for patients.

And when it comes to insulin, the market leader is undoubtedly Novo Nordisk A/S (NYSE:NVO), a global health care pharmaceutical company with more than 85 years in the market. The company has the broadest diabetes product portfolio in the industry, holding more than 50% of insulin market share. In addition, Novo Nordisk has a leading position within areas such as haemostasis management, growth hormone therapy and hormone replacement therapy.As the general population struggles with a growing obesity crisis, Novo is well positioned to help patients control their diabetes. In fact, since 2006, the stock has gained more than 500%. Take a look at the chart below… 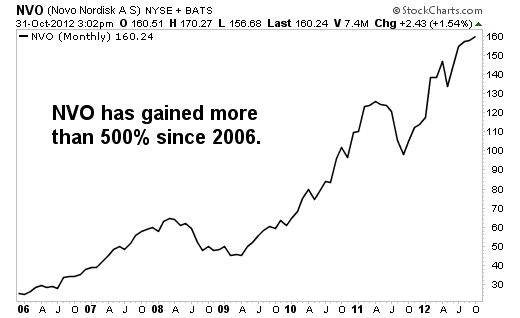 Patient conversions to more expensive, modern insulin offerings are expected to increase at a 10% annual pace during the next decade. And because the company also manufactures the industry’s most modern and effective insulin analogs, which allow it to charge as much as 150% more than its competitors, the growth prospects for the company are even higher.

Much of Novo’s recent growth can be attributed to sales of Victoza. The drug was originally intended for diabetes treatment, but is now also marketed to treat obesity. Sales of the drug brought in more than $1 billion in 2011. Total sales for that entire year were nearly $11.7 billion.

Novo has also developed therapeutic proteins, which have been used to create a highly profitable line of biopharmaceutical products for hemophilia and other bleeding disorders. This development has allowed Novo to diversify its business, increase its top line and increase profit margins.

The company has a strong financial position. As of June 30, the company had cash balance of $17.5 billion, which is more than 30 times its long-term debt obligations. Considering the firm’s strong balance sheet and robust free cash flow generation, there are no concerns about its ability to repay its debts. In addition, one of Novo’s key strengths is its successful management strategy. I have been impressed with Novo’s commitment to return cash to shareholders through dividends and share repurchases.

Risks to Consider: Generic-drug competition is a major threat to Novo in several markets, especially for its relatively easy-to-manufacture human insulin. During the next several years, additional threats such as an inhaled insulin alternative or even a cure for Type 1 diabetes, could negatively affect Novo’s sales.

With new health care legislations sweeping several countries, Novo has seen steep price declines for many of its drugs. This could reduce its revenue base and lower profitability if the trend continues. Additionally, Novo faces a bit of currency risk with a significant portion of its sales coming in U.S. dollars while a larger portion of its costs are denominated in Danish krone. Adverse currency fluctuations could impair its profitability.

Action to Take –> Having said that, the upside still far exceeds the potential downside. Fighting the diabetes crisis is an uphill battle and Novo appears to have the upper hand for the unforeseeable future.

As such, buy Novo Nordisk up to $175 a share. This stock has been delivering annual gains of more than 20% for the past 15 years (four times the return of the S&P 500). I expect Novo to continue to outperform the market and hit $200 within the next six to 12 months.

This article was originally written by Jay Peroni, and posted on StreetAuthority.

Stocks to Buy For Hyperinflation