The Bakken Shale… the very mention of it conjures images of gushing oil wells, makeshift work camps (known as “man camps”) and North Dakota boom towns bursting at the seams.

It’s arguably the most prolific oil source in North America — a symbol of prosperity and hope in what’s been a difficult time in the United States during the past few years.

And here’s the good news: I’ve got my eyes on a company that’s right in the middle of the action, having built an expansive position in the rich Bakken Shale. Daily oil production doubled in 2010, tripled in 2011 and will likely quadruple in 2012. That accelerating output is leading to off-the-charts earnings growth.

The company is a pure play on the Bakken Shale, and it’s no coincidence that it is also one of the fastest-growing exploration and production companies in the nation. The company has steadily expanded its footprint in the Williston Basin (which extends into adjacent areas of Canada), from 72,000 acres in 2010 to 93,000 in June 2011 to 155,000 today. 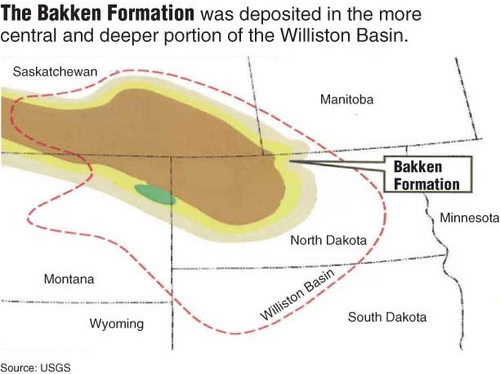 Most of that leasehold is in Williams and McKenzie counties of western North Dakota, where Kodiak has well-known neighbors such as Statoil ASA (NYSE:STO) and Continental Resources, Inc. (NYSE:CLR).

The company has barely scratched the surface of its 155,000 acres. But it already has an interest in 188 active wells that are spitting out staggering amounts of crude oil — approximately 13,000 barrels per day (bpd) last quarter.

That’s triple Kodiak’s average output of 4,000 bpd in 2011. And that rising volume is making a dramatic impact on the income statement.

Meanwhile, spreading fixed costs over a larger production base also lowers expenses on a per-unit basis. Lease operating expenses have dropped to $5.60 from $7.46 per barrel over the past year. General and administrative costs have been halved to $7.05 from $17.58 per barrel.

As a result, Kodiak is pocketing $54.59 in cash from every barrel sold. With its oil fetching $78.93 per barrel last quarter, that’s a healthy cash margin of 69%.

And that’s nothing compared with what might happen in the near future. Consider these two pertinent facts:

1) With crude oil rebounding to $95 from $78, each barrel sold will likely command a fatter profit.

2) Six months from now, Kodiak will likely be selling an additional 14,000 barrels per day above and beyond current production.

The sharp increase in daily output would have been enough to jolt profits even if oil were stuck in neutral — but the bounce in price will magnify the impact.

And Kodiak isn’t stopping there.

Management plans to spend $585 million in 2012 to boost production in 2013 and beyond. Just 2% of that will be spent in pursuit of new acreage; most will be invested to aggressively harvest existing assets.

And there is plenty of fruit on the vine. Kodiak is sitting on 70 million barrels of proved reserves (86% oil, 14% natural gas). That’s a 36% increase from the start of the year.

To bring that oil to the surface even faster, the company is utilizing seven drilling rigs and has a dedicated 24-hour frac crew at its disposal. Those rigs will complete another 70 wells this year. But with only 188 active wells out of 1,100 prospective drilling locations, Kodiak has barely tapped its true potential.

That’s an exhilarating thought for a company whose production and profits are already zooming at a 300%-plus pace.

And here’s another thing to keep in mind… Kodiak currently sells just 60% of the natural gas its wells produce. The remaining 40% is flared (burned) away because of insufficient midstream infrastructure. The addition of new pipelines in the Bakken area is increasing takeaway capacity, so more gas will be sold rather than wasted. And if natural gas prices continue perking up, then that’s icing on the cake.

Risks to Consider: It costs more than $10 million to complete a well in the Bakken Shale, and service costs in the crowded play have risen dramatically, particularly those related to disposal of fracking fluids and waste-water.

Action to Take –> Kodiak isn’t just growing briskly. The company is also growing efficiently, reducing the number of days needed to complete an average well (a big deal when rig rates can run upwards of $25,000 per day).

Kodiak reminds me of Brigham Exploration, a former portfolio holding in my Scarcity & Real Wealthnewsletter, in a similar situation. Brigham was producing about 21,000 barrels per day last year, mostly in the Bakken Shale, before a foreign oil giant offered a large premium to gobble up the company for $4.7 billion — or $223,000 per flowing barrel. By the same measure, based on projected year-end production of 27,000 bpd, Kodiak could soon be selling for just $88,000 per flowing barrel. That’s only one metric, of course, but it does speak to the potential private market value of Kodiak’s oil.

I’m intrigued by the potential Kodiak is showing. It has big-time potential. Any investor looking for a moderately aggressive oil and gas stock should put it near the top of their watchlist.

This article was originally written by Nathan Slaughter, and posted on StreetAuthority.

Walgreen: How It Plans on Realizing $1 BIllion in Synergies