This has prompted CEO Michael Jeffries to set up special teams led by senior executives to examine the company’s operating model to find and eliminate redundancies and inefficiencies, with the primary goal of simplifying its model and reducing expenses. By reducing these costs, the company hopes to be able to raise prices again to recover bring its operating margin back into the low teens over the next couple of years.

Abercrombie has also hired an outside consulting firm to aid in its effort, highlighting the seriousness of this problem. “Our profitability is not where it needs to be,” Jeffries told analysts on a conference call. The company is also conducting market surveys to better understand its customers’ tastes and competitors.

In my opinion, Jeffries’ strategy is clearly flawed. When your company’s same-store sales are declining both domestically and internationally, is it really a good time to raise prices?

Abercrombie has been attempting to break a streak of quarterly same-store declines by offering new fashions beyond its logo-driven apparel, which have waned in popularity over the past year. H&M and Forever 21 notably refresh their products at a much faster pace than Abercrombie. In response, it has also offered new merchandise more frequently. Abercrombie also started loyalty-club programs in a bid to attract more return customers.

While Aeropostale and Abercrombie can be considered fundamentally cheaper, Gap and American Eagle exhibit far stronger same-store sales. Although Abercrombie’s revenue growth over the past three years has remianed steady, a look at its lack of bottom line growth reveals Abercrombie’s true weakness. 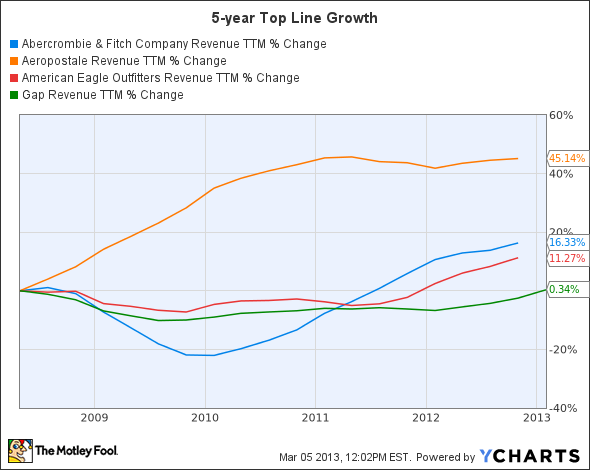 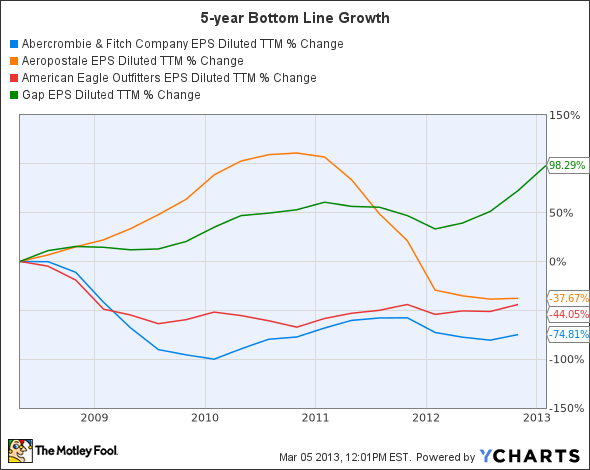 Investors should avoid Abercrombie & Fitch Co. (NYSE:ANF). The company’s same-store sales are still weak and its turnaround strategy is questionable. Although cleaning up inefficiencies may tighten up its operating margins, Abercrombie simply lacks the pricing power and appeal to steal market share from its rivals. Expanding aggressively overseas while closing down domestic ones could also be reckless, considering the company’s nasty international same-store sales decline during the fourth quarter.

Abercrombie is betting that pent up demand, seen in its strong e-commerce and direct-to-consumer sales in international markets, could translate well to strategically located brick-and-mortar stores. However, I firmly believe that the worst may still be to come for the beleaguered retailer, as it loses its identity in an increasingly crowded marketplace.

The article This Retailer May Be Doomed in 2013 originally appeared on Fool.com and is written by Leo Sun.

Limited Brands, Inc. (LTD): The Secret That Everyone Knows About

How The Gap Inc. (GPS)’s Focus on Brand Made the Difference

Friday’s Post-Earnings Movers: Is it Time to Buy Frontline Ltd (FRO) and...