This Is What Hedge Funds Think About Nelnet, Inc. (NNI)

A market surge in the first quarter, spurred by easing global macroeconomic concerns and Powell’s pivot ended up having a positive impact on the markets and many hedge funds as a result. The stocks of smaller companies which were especially hard hit during the fourth quarter slightly outperformed the market during the first quarter. Unfortunately, Trump is unpredictable and volatility returned in the second quarter and smaller-cap stocks went back to selling off. We finished compiling the latest 13F filings to get an idea about what hedge funds are thinking about the overall market as well as individual stocks. In this article we will study the hedge fund sentiment to see how those concerns affected their ownership of Nelnet, Inc. (NYSE:NNI) during the quarter.

Nelnet, Inc. (NYSE:NNI) has seen an increase in activity from the world’s largest hedge funds of late. Our calculations also showed that NNI isn’t among the 30 most popular stocks among hedge funds.

In the financial world there are a multitude of indicators shareholders can use to size up stocks. A pair of the best indicators are hedge fund and insider trading sentiment. Our experts have shown that, historically, those who follow the best picks of the top money managers can trounce the market by a solid amount (see the details here).

At the end of the first quarter, a total of 15 of the hedge funds tracked by Insider Monkey held long positions in this stock, a change of 7% from the fourth quarter of 2018. Below, you can check out the change in hedge fund sentiment towards NNI over the last 15 quarters. With hedgies’ sentiment swirling, there exists an “upper tier” of notable hedge fund managers who were upping their holdings substantially (or already accumulated large positions). 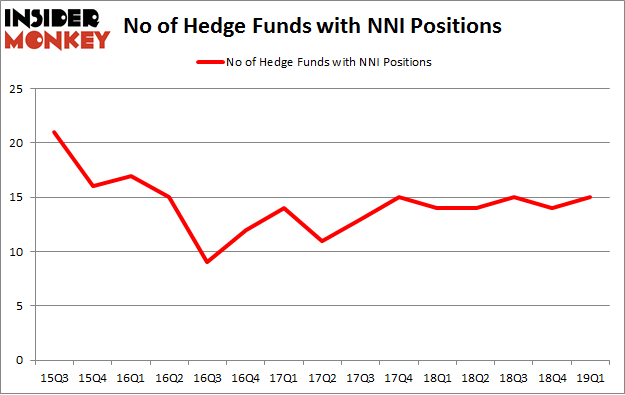 As one would reasonably expect, key hedge funds were leading the bulls’ herd. Marshall Wace LLP, managed by Paul Marshall and Ian Wace, initiated the largest position in Nelnet, Inc. (NYSE:NNI). Marshall Wace LLP had $0.8 million invested in the company at the end of the quarter. David Harding’s Winton Capital Management also made a $0.5 million investment in the stock during the quarter. The following funds were also among the new NNI investors: Michael Gelband’s ExodusPoint Capital and Alec Litowitz and Ross Laser’s Magnetar Capital.

As you can see these stocks had an average of 17.25 hedge funds with bullish positions and the average amount invested in these stocks was $180 million. That figure was $77 million in NNI’s case. The Cheesecake Factory Incorporated (NASDAQ:CAKE) is the most popular stock in this table. On the other hand AMN Healthcare Services Inc (NYSE:AMN) is the least popular one with only 11 bullish hedge fund positions. Nelnet, Inc. (NYSE:NNI) is not the least popular stock in this group but hedge fund interest is still below average. Our calculations showed that top 20 most popular stocks among hedge funds returned 6.2% in Q2 through June 19th and outperformed the S&P 500 ETF (SPY) by nearly 3 percentage points. A small number of hedge funds were also right about betting on NNI as the stock returned 7.2% during the same time frame and outperformed the market by an even larger margin.