These Hedge Funds Are Getting Killed By Netflix, Inc. (NFLX)

Netflix, Inc. (NASDAQ:NFLX) did not perform as the Street had expected today, coming in flat on third quarter earnings by a significant margin. The streaming movie subscription service dropped the proverbial bomb at the end of the trading day this afternoon, reporting that Q3 earnings EPS was down a staggering 88% from the same time last year. In total, Netflix, Inc. (NASDAQ:NFLX) came in with a little over $7 million in net income for the quarter, compared to $62.5 million in Q3 of 2011. The company’s revenues were up close to 10% YOY, but profits were dragged down by Netflix’s massive global expansion effort.

Additional worries for the company include: (1) lower time spent on the platform by Netflix, Inc. (NASDAQ:NFLX) subscribers, (2) increased competition from indirect competitors like Redbox and Blockbuster Express, (3) an over-reliance on high-profile TV shows, and (4) delayed profitability in Latin America. While Netflix, Inc. (NASDAQ:NFLX) CEO Reed Hastings did mention that international streaming subscribers currently rest at 4.3 million – better than most forecasts – he said that his company would “likely” experience a loss in the fourth quarter as well.

Shares of Netflix, Inc. (NASDAQ:NFLX) are currently down over 16% after hours, and nineteen of the hedge funds we track are currently bullish on the stock. Here are the top ten biggest losers, in order of value, and excluding those holding options: 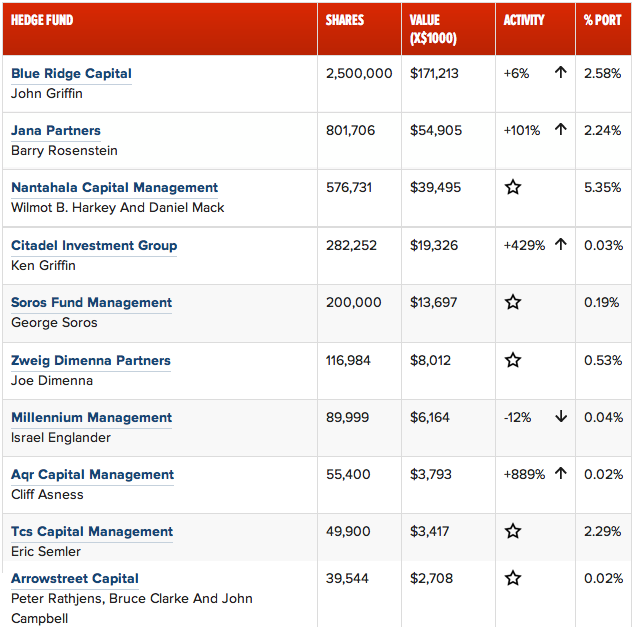 Why Does Jana Partners Want to Break Up This Company?

Is Molycorp a Good Buy?

Is TripAdvisor a Good Investment? This Hedge Fund Thinks So