The Dow Jones Industrial Average set a fresh five-year high again this morning and is getting awfully close to an all-time record.

The Procter & Gamble Company (NYSE:PG) added nine points to the Dow. The consumer products giant updated its 2013 guidance following news of the Venezuelan currency-devaluation, and the revision could have been much worse. The $0.03 reduction of total 2013 earnings expectations is a mere 1% of P&G’s overall earnings. The stock jumped as much as 1.5% on the new guidance.

Hot on P&G’s heels, you’ll see 3M Co (NYSE:MMM) . The stock gained 1% and is setting all-time highs of its own. Bank of America Merrill Lynch just added the stock to its list of “very strong buy” recommendations, citing strong margin and earnings trends. And so the Dow also rises by seven points.

You know who else is setting new all-time highs? Hello, Google Inc (NASDAQ:GOOG) !

The online search and advertising veteran quietly passed Microsoft Corporation (NASDAQ:MSFT) in market value last December, making it the second-largest tech company by market cap. Truth be told, the changing of the guard has seemed obvious for years. 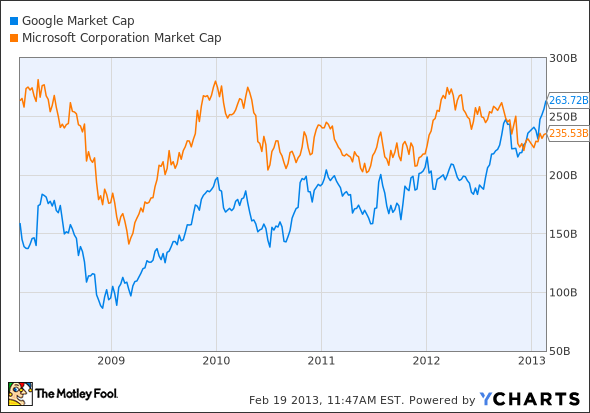 Microsoft has squandered its desktop and enterprise-computing advantages in the mobile era, and richly deserved to trade sideways in the last five years. Google, on the other hand, has built on its search dominance with massive mobile success and is diversifying far beyond the edges of your browser.

One day, Google might take a seat at the Dow’s roundtable right alongside Mr. Softy. The only two obstacles to joining the elite market barometer would be finding an open spot among the current 30 components and splitting the $800 stock price by a large ratio. A 4-to-1 split would make Google one of the most influential bellwethers on the Dow, and a 10-to-1 split would still rank Big G among the top third of Dow movers.

I’m not holding my breath in anticipation, as Google hasn’t shown any desire to split its shares. But the 15-year-old company sure looks like a blue chip already.

The article These Blue Chips Are Racing to All-Time Highs originally appeared on Fool.com and is written by Anders Bylund.