These 3 Energy Stocks Could Soar if Romney Wins the Election

Major political events can have a powerful effect on the market, particularly oil stocks. And with the presidential election only two weeks away, a big profit opportunity is at hand.

Two and a half years after the BP plc (NYSE:BP) oil spill rocked the Gulf of Mexico and the world, the energy industry is still suffering from low production levels and restricted access to drilling permits.

Total Gulf production of 1.5 million barrels/day is still well below levels of 1.75 million from 2007 and far below previous projections for 2012 by about 700,000. The U.S. Bureau of Safety and Environmental Enforcement, which regulates domestic offshore drilling, has also severely restricted access to new deep-sea drilling permits. After issuing 106 permits in 2007, the department issued a one-year moratorium that saw no new permits issued for 12 months after the spill, and then just 32 in 2010, 38 in 2011 and 89 through 2012.

Although the implication of lower production and restricted access to new permits has weighed on many companies across the energy industry, none were more affected than the deep-sea drillers that were based in the Gulf of Mexico. The group saw a huge chunk of its most profitable business virtually wiped away, which was a crushing blow to revenue and earnings that has sent Gulf drillers to multi-year lows not seen since the financial crash of 2008.

And now the upcoming presidential election could change all that. With Gulf permits once again trending higher and the two candidates in a virtual dead heat just two weeks before the election, deep-water drilling companies are in position for big gains.

While both presidential candidates have expressed their desire to achieve more energy independence, former Massachusetts Governor Mitt Romney has made it clear that offshore drilling and additional drilling permits would be a cornerstone of his energy policy. Romney has stated he wants to explore the offshore coasts of Florida, Carolina and Virginia. He has also said he wants to permit access to the Atlantic and Pacific Outer Continental Shelves, public lands and the Arctic National Wildlife Refuge.

The GOP presidential candidate has made it clear that he is in favor of more drilling and domestic resources usage to combat the cost of imports from the Middle East. Therefore, if he wins the election on Nov 7, then it could signal a huge reversal of fortune for the deep-sea drillers that have been beaten into the ground in the past two years.

[Special Presentation: The “Private Stock Market” Where Mitt Romney Made a Fortune]

1. Transocean LTD (NYSE:RIG)
Transocean is the largest offshore drilling company in the world, with a market cap of $28 billion and significant drilling interests in the Gulf of Mexico. The company took a double hit on the Gulf spill. Not only was the company involved in the actual event as the owner of the Deepwater Horizon — the semi-submersible drilling platform that sunk to the bottom of the ocean in April 2010 — but weakness in deep-water drilling permits in the Gulf have hit Transocean’s bottom line badly.

More than two years after the oil spill disaster, the company’s share price is still down more than 50% from before the accident.

But there is light at the end of the tunnel for Transocean. Analysts are currently projecting full-year earnings of $2.86 per share, just 10 cents short of full-year earnings from 2010, when shares topped off above $93. Take a look at how Transocean took a beating in both the financial crisis of 2008 and the Gulf spill in Aril of 2010. 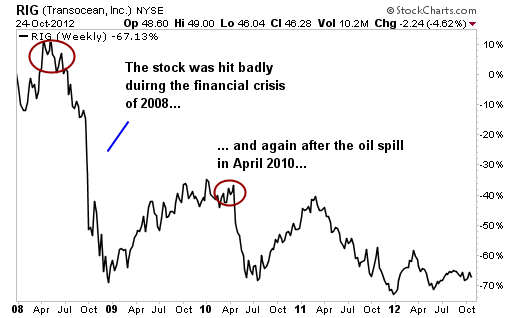 2. Noble Corporation (NYSE:NE)
Noble is also a drilling specialist, but much smaller than Transocean with a market cap of $10 billion. Like Transocean, the company has suffered from weakness and extreme volatility in the past two years over uncertainty regarding the deep-water drilling climate in the Gulf of Mexico.

Although Noble’s forward price-to-earnings (P/E) ratio of 17 is above its average of 14 in the past 10 years, additional drilling permits in the Gulf would have a sizeable effect on revenue and earnings. This is already starting to show up in estimates, with analysts projecting full-year earnings of $4.40 per share in 2013. If Noble simply kept its current valuation, then shares would be in position to roughly double from $38 to about $75 if those earnings targets are met ($4.40 x 17 = $74.80).

3. Diamond Offshore Drilling, Inc. (NYSE:DO)
Diamond has also been on a roller-coaster ride in the past two years, with shares still down 34% from peak levels in 2010 before the Gulf oil spill. But looking forward, there are more than a few reasons to bebullish on the company. In its recent third-quarter results, Diamond was able to execute huge price increases on growing demand. Its Ocean Endeavor rig, which had been generating $285,000 of daily revenue, was just signed to an 18-month contract starting in December 2013 at $521,665 per day. Its Ocean America rig also saw a big increase, with Chevron Corporation (NYSE:CVX) taking control of the platform for an 18-month contract that saw its daily rate increase from $405,000 to $475,000. Analysts are looking for 17% earnings growth in 2013 to $6.34.

Risks to Consider: The presidential race is a dead heat. A Barack Obama victory wouldn’t necessarily be bad for the group, as permits are on the rise. But the scenario wouldn’t be as bullish as a Romney win. Energy stocks and drillers in particular are sensitive to economic fluctuations. More signs of slower growth would inhibit capital inflows into the group.

Action to Take –> Romney has made it clear that additional drilling and drilling permits are a cornerstone of his energy policy. This would be a big boost for the drilling industry in general and Gulf drillers in particular. The three energy drillers mentioned here are in position for big gains if he wins the election.

This article was originally written by Michael Vodicka, and posted on StreetAuthority.

Nike: A Potential For A Dividend Increase