Wall Street analysts, along with the financial media, will soon scour the landscape and make bold predictions about which stocks will have the biggest upside during the next 12 months.

Frankly, such bold calls hinge on the state of the U.S. economy. If the economy appears to be moving onto a higher plane of growth, then investors will reward companies that deliver the most robust growth. But if the economy slumps, then the more stable blue chip companies will likely get rewarded. These are the companies that manage steady (though unspectacular) growth during any economic climate.

For a number of companies, the outlook remains bright. More precisely, there are 37 stocks in the S&P 500 that are expected to boost sales and profits at least 10% in 2013 and grow by at least that much again in 2014, according to analysts’ forecasts. These forecasts appear to be made with an eye on the economy that is still trying to get break-away speed.” For now, the investment community is assuming the U.S. economy could grow between 1.5% and 2.5% in 2013, and perhaps a bit more robustly in 2014.

Among the 37 stocks, some seemingly deep bargains can be spotted.

For example, Noble Corporation (NYSE:NE), ENSCO PLC (NYSE:ESV) and Rowan Companies PLC (NYSE:RDC) are all expected to meet those growth criteria for 2013 and 2014, and are valued at just seven times projected 2014 profits. But these are highly cyclical businesses and, as such, they will never get a robust price-to-earnings (P/E) ratio anyway.

I’ve taken the liberty of scrubbing out energy-related cyclical stocks and winnowed the group to just 29 stocks. Even if the economy perks up in 2013, some may remain unconvinced that the U.S. economy can keep growing into 2014, as so many headwinds remain in place. This scenario could spell trouble for companies that didn’t show their mettle during the last slowdown. So I’ve eliminated any company that saw sales fall more than 10% during the Great Recession. This narrowed the list down to 21 stocks…

Solid growth in 2013 and 2014
This doesn’t mean each stock in this list is a bargain. Chipotle Mexican Grill, Inc. (NYSE:CMG), for example, looked extremely overvalued when I panned the stock a month ago and though shares have slumped since then, they still trade for almost 20 times projected profits.

I also recently noted that Google Inc (NASDAQ:GOOG) was on the cusp of slowing growth, though after a subsequent fall as a result of a missed third-quarter earnings report, the P/E ratio on projected 2014 results is now more reasonable at around 12.

The lesson for stocks like Chipotle and Google is that you need to dig past the appearances of strong growth and identify whether a company can meet or exceed the lofty expectations investors have placed in front of it.

Even without a crystal ball, valuations still matter. So I’ve kicked out any stocks that trade for more than 16 times projected 2014 profits. This is just too rich of a multiple for a slow economy. This leaves us with 12 stocks in the S&P 500 that are poised for sustained robust growth and sport reasonable valuations.

After falling more than $75 since mid-September, Apple Inc. (NASDAQ:AAPL) now looks like a solid GARP(growth at a reasonable price) stock. It’s even more of a bargain when you consider that Apple may have finished the September quarter with more than $120 billion in net cash in the bank. That’s more than 20% of the company’s market value, meaning the company’s cash-adjusted P/E ratio is likely closer to eight.

Priceline.com Inc (NASDAQ:PCLN) is another favorite high-growth stock, especially after falling roughly $70 since early October. Though Priceline.com rallied nicely after my look at the company two months ago, the recent pullback leads me to pound the table again. That said, there’s no hurry to own this stock ahead of the Nov. 5 earnings release date, so this is a good time to simply get up to speed on this greatbusiness model.

Lastly, I am taking a fresh look at energy drink maker Monster Beverage Corp (NASDAQ:MNST). Back in May, I noted that this stock looked like it had peaked. 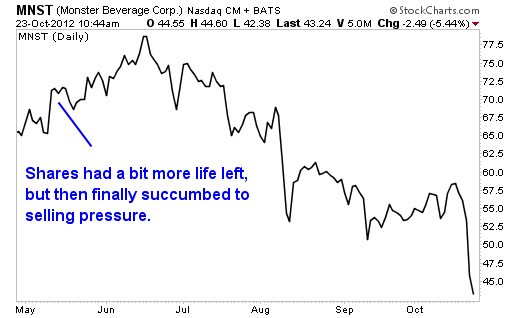 Now, below $50, this stock may be freshly appealing. Management has finally sought to add more flavors (such as Cuba Lima, a non-alcoholic version of a Cuba Libre; and Absolutely Zero, a diet version of the company’s top-selling drink) which should add to retail shelf space and market share gains. Coupled with a geographic expansion, Monster should be able to generate mid-teens sales growth in 2013 (to about $2.5 billion) and at a similar growth rate again in 2014.

One word of caution for this stock: The U.S. Food & Drug Administration (FDA) is looking into reports that heavy consumption of energy drinks has led to some deaths. In a just-published morning note, Goldman Sachs’ analysts wrote that they “do not believe that these headlines will impact MNST’s sales growth in the U.S. nor do we believe the ultimate legal and regulatory outcome will be a significantly onerous one.” Still, monitor this issue in coming days just to be sure that sellers have already been fully shaken out of the stock. The end-result may simply be tighter warning labels, and if so, this is becoming an appealing GARP stock once again.

Risks to Consider: A number of the companies in the table above won’t be able to boost sales and earnings per share by more than 10% in 2013 and 2014 if the economy deeply weakens.

Action to Take –> This is a very worthy group of stocks for further research as we head toward 2013. A not-too-hot and not-too-cold economic environment may create the perfect investor backdrop for these steady growers.

What Exactly Is The Apple Inc (AAPL) Fusion Drive?

Is It Time To Buy Monster Beverage?