Restaurant chain Sonic Corporation (NASDAQ:SONC), best known for its iconic drive-ins, recently surprised Wall Street with strong second quarter earnings that spurred the stock to rally nearly 10% on March 26. The company, founded in 1953 as a root beer stand and rebranded as Sonic in 1959, has had an interesting run since its public debut in 1991. The years leading up to the Great Recession were kind to Sonic shareholders, as the stock rose 1,800% to an all-time high of $23. 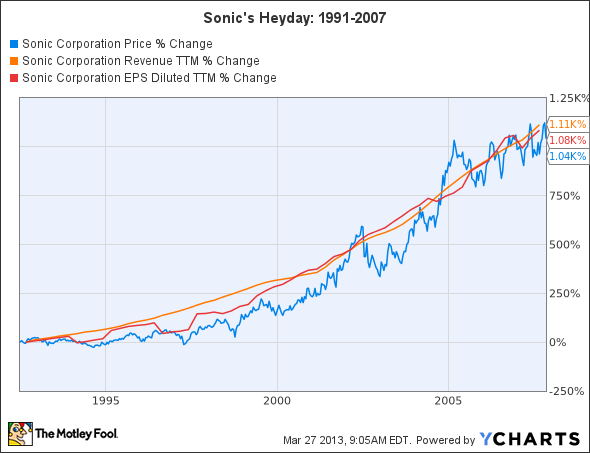 Today, the stock is trading at roughly half that price, and its climb back has been mired with the challenges of declining revenue and increased competition in a fragmented market. The company went from its heyday straight into a five-year long hangover. 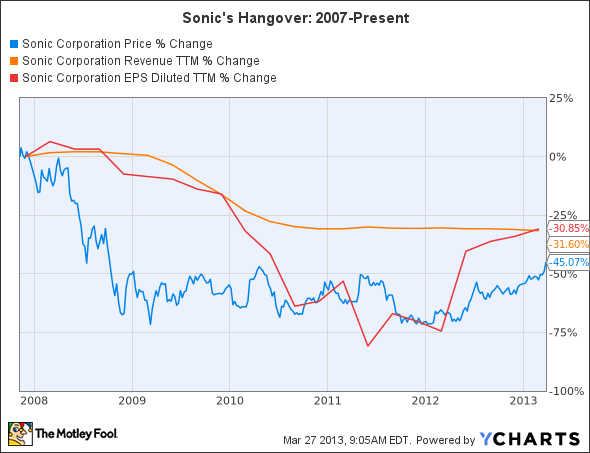 However, with 3,526 locations in the United States, Sonic is still a strong contender in the industry and its solid growth in the previous quarter reflects its strengths. Shares have risen more than 70% over the past twelve months – so is it time for investors to jump on the bandwagon?

The company attributed its robust earnings to lower expenses. During the quarter, payroll and benefits costs dropped 4%, food and packaging costs were reduced by 4.6%, and SG&A (sales, general & administrative) expenses declined by 3.0%. Drive-in margins also improved 140 basis points to 11.8%

A new menu and a revived marketing campaign

Although its new menu items show innovation, I am slightly concerned with the company’s weaker value menu options. Competitors such as McDonald’s Corporation (NYSE:MCD), Burger King Worldwide Inc (NYSE:BKW) and The Wendy’s Company (NASDAQ:WEN) offer far more comprehensive value menus, which have been considered a major asset during economic downturns.

Sonic Corporation (NASDAQ:SONC) also credited a revival of its “Two Guys” as a positive growth catalyst during the quarter.

My primary concern for Sonic is its lack of sales growth. In an industry where some rivals are having problems growing earnings on top of healthy revenue, Sonic Corporation (NASDAQ:SONC) faces the opposite problem – rising profit on a long-term decline in revenue. That is a far more dangerous situation, since margins can only be stretched so far. Therefore, I’m not too optimistic about Sonic’s growth prospects. 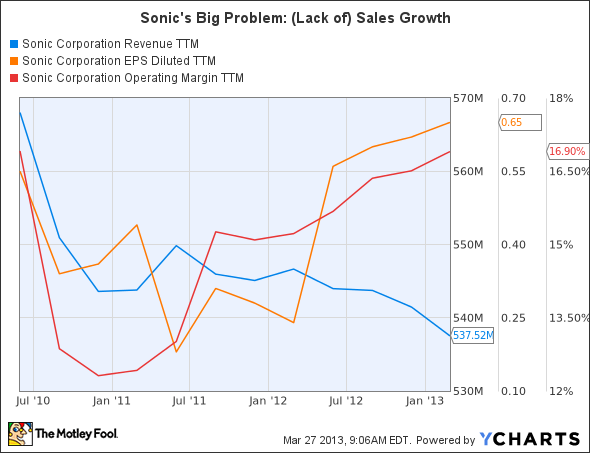 While margins have been expanding due to reduced costs, Sonic Corporation (NASDAQ:SONC)’s steep decline in revenue, which has continued through the second quarter, is too important to ignore.

The winter season is generally a slow one for Sonic, since its drive-in format is largely weather-dependent. As a result, Sonic’s top and bottom lines actually respectively decreased 11.83% and 54.55% from the first quarter.

When faced with this dilemma, fast food restaurants tend to boost sales by adding more stores, especially franchised locations. The problem is that nearly 90% of Sonic’s locations are already franchised – roughly in line with McDonald’s and Burger King Worldwide Inc (NYSE:BKW)‘s franchise saturation levels. Wendy’s has a slightly lower percentage of franchise stores, at under 80%.

That leaves Sonic with two options – to build more locations or to raise royalty rates on its franchises. Considering that Sonic only added three new franchised drive-ins during the quarter, it’s safe to say that Sonic is not keen to expand and increase its expenses, given its precarious situation.