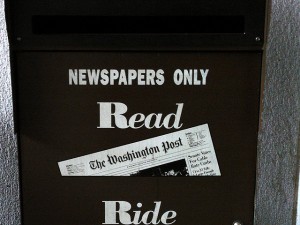 The rapidly evolving technology landscape is a discussion usually focused on the market’s biggest tech stocks. However, the way in which consumers receive and utilize media is affecting industries other than just the technology sector. In particular, the newspaper business is at a critical turning point.

The push for high-profile technology companies to capitalize on the trend towards mobile has been well-documented. Less so, however, is the turbulence surrounding America’s newspaper industry. Some of the country’s biggest publicly-traded newspapers face similar issues.

The Washington Post Company (NYSE:WPO) and its investors might take solace in the fact that legendary investor Warren Buffett is among the company’s financial backers. Buffett has a famous proclivity for daily newspapers, having purchased 28 of them over the past couple years.

Despite stagnating profits and readership numbers that are heading in the wrong direction, Buffett maintains his belief in America’s daily newspapers. He recently defended his investment in The Washington Post Company (NYSE:WPO), claiming that he expects total annual returns from his newspaper investments to hover around 10% annually going forward.

The company’s total revenue in its newspaper division dropped 4% because of lower ad sales at its print edition. In addition, it reported an operating loss of $34.5 million mainly due to severance costs.

One positive note was the company’s progress in its mobile positioning. Paid digital subscriptions across the company totaled approximately 708,000 at quarter’s end, a 45% year-over-year increase from the end of the first quarter of 2012.

The New York Times Company (NYSE:NYT) had to face the reality of the declining newspaper industry by first slashing its dividend in 2008, then eliminating it entirely. The health of a company’s dividend is one of the best indicators of the firm’s financial strength, and The New York Times Company (NYSE:NYT)’s suspended payout is surely a bad sign.

The company delivered 2% revenue growth for full-year 2012, but sales remain below 2010 levels. In addition, the increase in net revenue comes despite especially strong growth in digital revenue. Publishing advertising, which accounts for nearly half the company’s revenue, has declined for two years in a row and is a major drag on the company’s results.

Should You Buy The New York Times Company (NYT)?

Here is What Hedge Funds Think About The Washington Post Company (NYSE:WPO)