Over the last few years, I’ve lost count of how many people have told me just how much they loathe the stock market.

Most troubling to me, however, is the fact the most common excuses offered for this hatred involve terrifying past experiences with stocks, even if they were only heard secondhand through a friend or family member.

Are we talking about the same market?
To be sure, I’ve still heard the same old arguments over the past few months, even as stocks rallied to all-time highs — those same intimidating stories of horrific price drops, devastated retirement accounts, crushed hopes, and ruined futures.

Then again, maybe it’s because most people have no clue what the market is really doing in any given year. Or maybe people are still skittish after the last crash, when stocks fell by more than 50% from late 2008 through March 2009 and reached their lowest point in more than 11 years.

As the folks at Fidelity Investments pointed out last Thursday, however, the average 401(k) retirement account balance for U.S. workers rose to a record high of $80,900 by the end of the first quarter, good for an 8.4% jump from the same time last year. All told, those same retirement accounts have risen 75% since the market lows in 2009.

Even better, the numbers for pre-retirees (workers 55 and older) were even more encouraging as their average account balances rose more than 95% to $255,000.

Now, we can be sure most of those older workers’ retirement accounts aren’t 100% invested in stocks, but it is safe to say the majority of those gains were the direct result of the strong performance in equities. Remember, since the market lows of 2009, the S&P 500 index has gained nearly 145%. Even better, when you account for dividends, the index has returned more than 167%.

Sure enough, the Fidelity study also pointed out that “nearly two-thirds (65 percent) of the overall average balance increase over the last year was due to gains in equities — underscoring the important role they play in saving for retirement.” Perhaps unsurprisingly, the remaining third came from continued contributions from both employees and employers.

So what happened?
Why, then, are we all still complaining even as our average 401(k) balances have never been higher?

It could have much to do with “loss aversion,” the concept which explains how losing money hurts a whole lot more than making it. But it also partly comes down to bad choices we, as imperfect investors, repeatedly make.

Rather than sticking with the market and realizing the storm would pass or, better yet, taking advantage of historic lows and actually buying stocks, some investors either stopped putting money into their accounts or simply panicked and sold… or, sadly, both.

For instance, while pre-retirees’ accounts grew 95% on average, there was also a small percentage of that group (thankfully, just 1.6%) who abandoned stocks altogether in reaction to the market volatility. Needless to say, their 401(k) balances grew only 25.9% over the same time period to an average of $101,000.

How, then, can you avoid making the same mistakes down the road?

Focus on great companies
First, avoid penny stocks like the plague. Too many have desperate scammers behind them, and your chances of actually hitting it big and finding the next Microsoft Corporation (NASDAQ:MSFT) in a company whose current stock price is $0.001 per share are… well… let’s just say you’d be better off playing nickel slots or buying a lottery ticket.

You could buy a low-cost index fund like the Vanguard 500 (VFINX), which is built to mimic the S&P 500 index and charges an expense ratio of just 0.17%.

However, if you prefer to avoid mutual funds and insist on picking individual stocks with a portion of your portfolio, start by focusing on solidly profitable companies whose businesses are built on more than just empty press releases and mass-marketing emails.

For example, take a look at how four of my favorite high-quality dividend stocks have fared, even as measured from the time the stock market hit its all-time highs in October 2007: 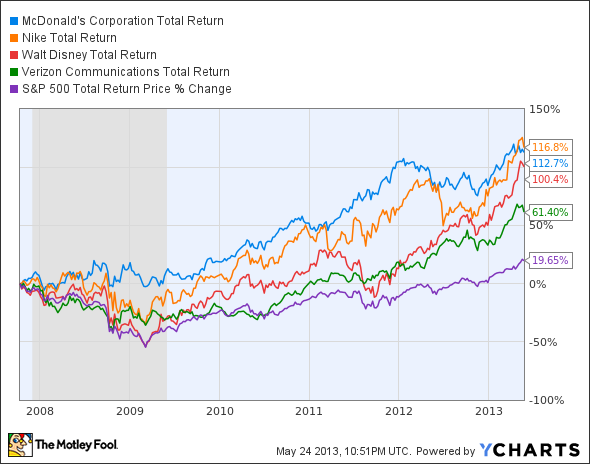 Of the four, only The Walt Disney Company (NYSE:DIS) fell as hard as the S&P 500 during the recession as consumers spent less on entertainment, but investors who stuck with the long-term-oriented House of Mouse after it acquired Marvel Entertainment in August 2009 have enjoyed significant outperformance since then. Now, the Disney stock is currently sitting near all-time highs as people flock back to its theme parks — the revenue for which grew an impressive 73% year over year on record attendance last quarter.

Meanwhile, Verizon Communications Inc. (NYSE:VZ) investors were able to put their feet up over the past five-and-a-half years and enjoyed a relatively steady ride, all while collecting a massive dividend that at times yielded more than 7%! Even now, the telecom giant remains solidly profitable and still offers investors a 3.9% dividend for their patience.

Then there’s global athletic wear specialist NIKE, Inc. (NYSE:NKE), which more than doubled since the market highs in 2007. Today, Nike still boasts a solid net profit margin of 9.2%, pays a 1.3% dividend, and has more than $4 billion in cash with just $161 million in long-term debt. Better yet, despite its assumed “mature” market, Nike showed investors it knows how to continue growing after posting year-over-year overall revenue growth of 9% last quarter.

Finally, there’s McDonald’s Corporation (NYSE:MCD), whose investors barely needed to flinch throughout the entire recession. Then again, it should come as little surprise that McDonald’s inexpensive foodstuff is perfectly suited for tough economic times. Even now, though, the company repeatedly shows a knack for evolving to a changing market without turning off consumers, be it adding healthier menu options to compete with smaller competitors, or simply adjusting the size of its burgers to fight the rising cost of beef.

Do your homework (the right way)
Finally, to better understand how to tip the scales in your favor with the stock market as trulyFoolish investors know it, you’ll also need to do your homework and learn how to invest properly with a long-term mind-set.

First, start by reading Benjamin Graham’s The Intelligent Investor, which Warren Buffett heralds as “by far the best book on investing ever written.” Then, when you’re done, read it again.