When my fellow investors ask me what my favorite long-term holding is, I never hesitate to tell them that it’s The Walt Disney Company (NYSE:DIS). In my opinion, Disney is an exceptional stock hidden in plain view, with rock solid business segments that are able to weather severe economic downturns while flourishing in times of prosperity.

Nearly half of The Walt Disney Company (NYSE:DIS)’s revenue is generated by its media networks, such as ESPN, and another third is brought in by its incomparable theme parks. Meanwhile, it also owns exciting properties such as Pixar, Marvel and Lucasfilm, which make it the largest force in entertainment on this planet. 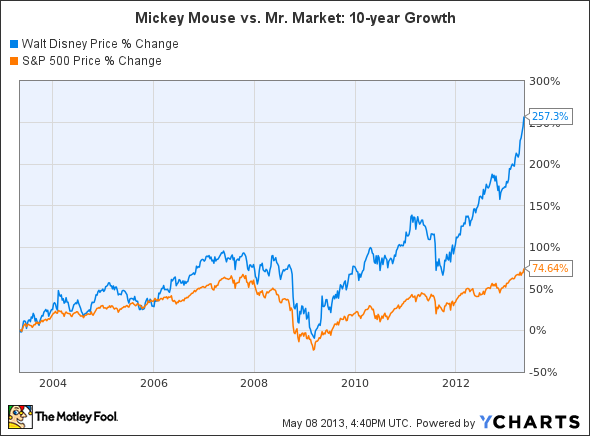 Therefore, it came as no surprise when The Walt Disney Company (NYSE:DIS) soundly beat Wall Street estimates with robust second quarter earnings. Disney’s net income rose 32% year-on-year to $1.5 billion during the second quarter. On a per share basis, Disney earned $0.83 per share, beating the analyst estimate by six cents. Revenue rose 10% to $10.6 billion, also topping the $10.5 billion that analysts had been expecting.

In this industry, Disney’s toughest competitor is Time Warner, which owns HBO, the Turner Networks (CNN, Cartoon Network, TNT, TBS), and the broadcast rights to NCAA games. However, Time Warner Inc (NYSE:TWX) fared far worse than Disney during its recently reported first quarter results, with flat revenue growth from the prior year quarter at $6.9 billion.

Despite its impressive top line growth, Disney’s ABC network reported a decline in advertising revenue as a result of lower rated programs. However, CEO Bob Iger stated that he was “reasonably bullish” regarding advertising growth for the rest of fiscal 2013.

Revenue at Disney’s parks and resorts, which now include its cruise lines, rose 14% to $3.3 billion. Disney operates theme parks in California, Florida, France, Japan and China. The company reported that higher guest spending and more hotel bookings, fueled by the launch of the Disney Fantasy cruise ship, contributed to its strong top line growth. Operating income at the segment also rose 72.5% to $383 million.

Disney’s Studio Entertainment division reported 13% revenue growth to $1.3 billion, thanks to the success of films such as Oz: The Great and Powerful and Wreck-it Ralph. Disney’s strong box office performance during the quarter shows that it has learned from past blunders such as Mars Needs Moms and John Carter. The studio division’s third quarter looks rosy as well, with Iron Man 3 having already grossed over $700 million worldwide within its first week.

The Walt Disney Company (NYSE:DIS)’s Studios easily outperformed Time Warner’s Warner Brothers film division, which reported a 4% decline in revenue to $2.7 billion last quarter. Warner Brothers’ offerings during the quarter, Gangster Squad and Jack and the Giant Slayer came in “below expectations,” according to Time Warner CEO Jeffrey Bewkes. In the current quarter, Warner Brothers is hoping that The Great Gatsby and The Hangover Part III can help it post some positive top line growth, but both films pale in comparison to Disney’s Iron Man 3 and Pixar’s upcoming Monsters University, the sequel to Monsters, Inc.