The Walt Disney Co (NYSE:DIS) operates as an entertainment company worldwide. The company operates in five segments: Media Networks, Parks and Resorts, Studio Entertainment, Consumer Products, and Interactive. The company is not a typical dividend growth stock, although it has paid dividends since 1957, and has never cut them.

Disney is a dividend angel which often raises dividends several years in a row, after which it keeps them unchanged. This is followed by another round of dividend raises again.

The most recent dividend increase was in December 2015, when the Board of Directors approved a 7.60% increase in the semi-annual dividend to 71 cents/share. The largest competitors for Disney include Time Warner Inc (NYSE:TWX), Viacom, Inc. (NASDAQ:VIA) and Twenty-First Century Fox Inc (NASDAQ:FOXA).

Over the past decade the stock has delivered an annualized total return of 13.20% to its shareholders. Future returns will be dependent on growth in earnings and dividend yields obtained by shareholders. 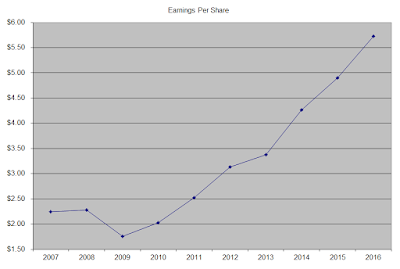 Between 2006 and 2016 The Walt Disney Co (NYSE:DIS) has been able to reduce the number of shares from 2.076 billion to 1.639 billion through consistent share buybacks.

Media networks is the bread and butter segment for Disney, as it generates almost half of the company’s profits. Disney has ESPN, which covers sports, and which are pretty popular. The dominant position in sports programming has allowed the company to earn affiliate fees from networks and advertising revenues. If you want to talk about sports in the office, you want to get the game and in-depth commentary from ESPN.

The profits from this segment are further reinvested on long-term rights for college and professional sport athletics programming. The company also owns Disney Channel and ABC Network. Disney Channel is one of the go-to places for programming for children, the other being competitor Nickelodeon.