The Threat And Risk Of Rising Interest Rates: Separating Fact From Fiction

The threat of rising interest rates is all the rage in financial circles today. However, the seminal question is: How real is the threat, and how much impact will rising rates have on stock prices and investor performance? This article will present my personal perspectives on interest rates and their potential impact on stock prices longer term.

There are many clichés in the world of Wall Street and many of them are trite. However, the best clichés often convey important and profound messages. A case in point is the old adage “Wall Street climbs a wall of worry.” The important message contained in this saying is that for the most part the market climbs.

Of course, there are always exceptions. Since the mid-1920s, we have had three periods of extended price drops spanning years rather than months. The timeframe spanning the mid-1920s up to the late 1940s was a real humdinger. However, within this timeframe there were also years of strong price performance interspersed. Another bear market spans the market peak in the mid-1960s which ended after the recession in the mid-1980s. And finally, the so-called “lost decade” that followed the peak of prices in calendar year 2000. Otherwise, the general direction of the stock market has been up. The following graph courtesy of Macrotrends illustrates the above: 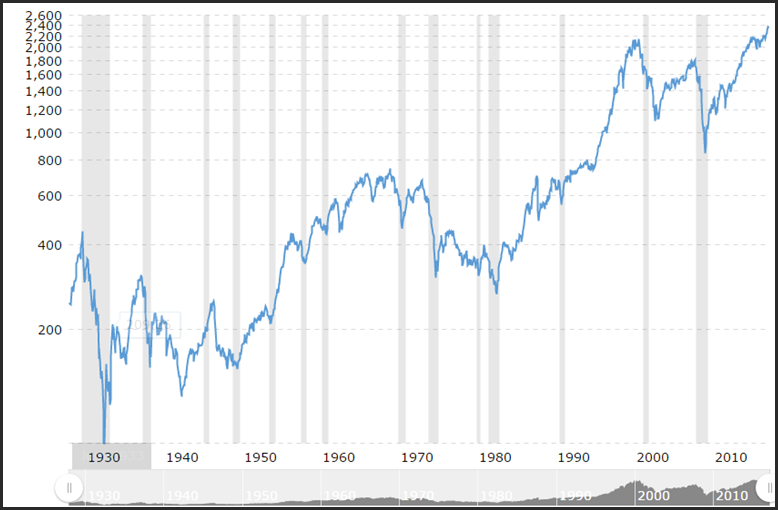 I would like to start my discussion about the impact of interest rates on our economy and stock values by pointing out an important reality. The economy does not work like a light switch. In other words, economic activity does not respond instantly to interest rate changes or political policy. It takes time for any widespread economic impact to occur or be felt. On the other hand, investor psychology can be instantaneous or at least more immediate. Consequently, I believe it’s important to make a distinction between long-term impacts versus short-term reactions.

Perhaps of equal importance is the understanding that interest rates are but one factor among many that can have an impact on stock prices in general, and even more importantly, on the prospects and fortunes of any individual company or stock. Therefore, I believe it is erroneous to think that stock prices and values are directly correlated to the level of interest rates. In truth, they can be a factor, and under certain circumstances – a major factor. However, there are many other factors that are also at play. As I will elaborate on later, the relative valuation at the time when interest rates change can either negate or accentuate the effect of a rate change.

As an additional aside, during this time I was also in the early stages of developing the F.A.S.T. Graphs™  fundamentals analyzer software tool for my own personal research and due diligence. Since the inverse relationship between interest rates and stock values was functioning as theory suggested, I thought it would be wise to create a graph that measured stock valuations (P/E ratios) versus interest rates on the 10-Year Treasury. Therefore, I could examine and measure the impact of interest rates on stock valuations into my analysis and due diligence process.