The defense sector has been under attack for the last few years as federal government budget cuts pressure the major companies in the sector. The surprising part is that the associated stocks continue to support very strong dividend yields combined with major stock buyback programs.

Lockheed Martin Corporation (NYSE:LMT), Northrop Grumman Corporation (NYSE:NOC), and Raytheon Company (NYSE:RTN) have not only survived the cuts, but in most cases the companies were able to reduce costs in order to maintain strong profits. Recent analyst estimates suggest that 2013 and 2014 will be better than expected providing support that the dividend yields averaging around 4% will at the least remain intact.

Even better, the stocks have recently been under pressure offering an entry point below recent highs while the market has soared. Another important fact missed by the general thought process of investors is that these companies generally benefit from the expected expansion in the aerospace sector.

One big way to determine whether a company or sector has reached bottom is to track the path of the analyst earnings estimates. Estimates that suddenly switch from declines to revisions upwards suggest that analysts had become too negative.

The below table highlights the estimate changes over the last 90 days:

The most surprising part about the recent earnings revisions is that the market has completely ignored them. As the chart below shows, all of the stocks have drastically underperformed the S&P 500 during that time period: 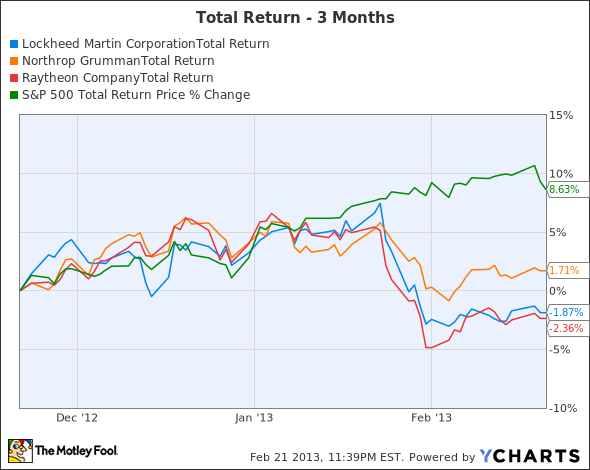 Investors looking for high yields should consider these defense stocks. The 5.2% dividend yield of Lockheed Martin is difficult to ignore while the other two stocks offer fantastic yields above 3%. In fact, Northrop Grumman has a net buyback yield of nearly 9% in addition to the solid dividend. The other two stocks routinely buyback stock as well providing substantial returns of capital to investors.