The Southern Company (SO), El Paso Electric Company (EE), Duke Energy Corp (DUK): Look for Buys Now That Utilities Are on the Outs

Utilities are among the most stable companies in the world. In a yield-starved world, however, the shares of such companies have become a lot more exciting than their boring images might suggest. This includes a long period of share-price increases off of 2007-2009 recession lows and, more recently, a sell-off. For patient income investors, however, the sell-off could be a great buying opportunity. Put The Southern Company (NYSE:SO), El Paso Electric Company (NYSE:EE), and Duke Energy Corp (NYSE:DUK) on your watch lists.

Utilities are the typical widow and orphan stocks. They provide a service that everyone needs, have massive customer bases, often have a regional monopoly, are generally heavily regulated, and many pay regular and increasing dividends. That isn’t to say that utilities are risk free, only that these businesses are pretty good ones to own if you are looking for regular and secure dividends.

However, over the last month, utility companies have started to trade lower. While there are any number of reasons for the sentiment switch, long-term income investors shouldn’t pay too much attention to market noise. If low yields have kept you on the sidelines, now is the time to make a list of utilities that you would like to own—if only the yields were higher. 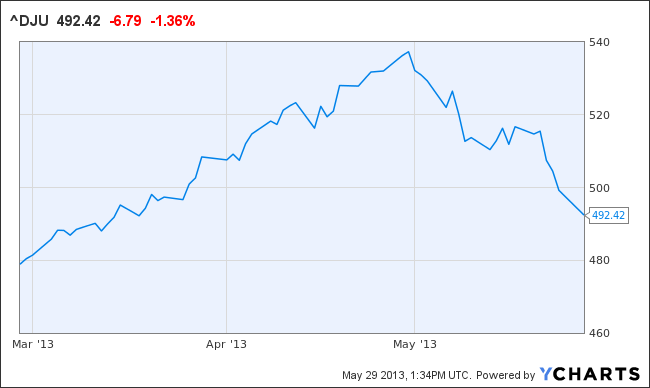 The Southern Company (NYSE:SO) is one of the largest utilities in the country. It serves around 4.4 million customers across Florida, Georgia, Mississippi, and Alabama. Despite a conservatively run merchant power operation, it is a pretty standard electric utility. And, it has a long history of regular dividend increases.

What makes the company interesting is that it operates in markets with growing populations and has good relationships with its regulators. So, there is notable opportunity for organic growth. Moreover, the company is in the process of upgrading its power-plant fleet with the construction of nuclear and coal gasification plants.

These are large and expensive projects, so they pose some risks. However, they are also likely to keep the company’s fuel costs low and lead to rate increases as construction costs are passed onto customers. The shares yield around 4.5%. If the yield goes into the 5.5% to 6.5% range, income investors should jump aboard.

Growth, but a low yield

El Paso Electric Company (NYSE:EE) is another boring utility. What makes it interesting is that it serves the growing markets of Texas and New Mexico. In addition to this, Mario Gabelli recently highlighted some unique factors that make the stock even more compelling, including a military base expansion and increased use of air conditioning.

The portfolio manager noted that the population at Fort Bliss in El Paso Electric Company (NYSE:EE), Texas has tripled in the past seven years and that it is being considered as an Air Force training center. That would likely mean more staff and increased electricity demand. That would be nice if it happens, but far more certain growth is on tap from air conditioning.

While air conditioning may be commonplace in some markets, Gabelli reports that “only 35% of El Paso Electric Company (NYSE:EE), [Texas] residences have refrigerated air conditioning, but 99% of new residences install central air conditioning.” So, as new homes are built for a growing population, electricity usage should also increase at a more rapid clip.

El Paso has a relatively low yield and a short dividend history. That said, if a utility sell off led to a yield in the 4% range, income investors would do well to take a look.

Duke Energy Corp (NYSE:DUK) serves even more customers than The Southern Company (NYSE:SO), with some 7.2 million customers in six states in the Southeast and Midwest. The company is a pretty boring utility after buying Progress Energy for nearly $14 billion.

Duke Energy Corp (DUK), The Southern Company (SO): Is It Time To Buy Utilities...Aqua America Inc (WTR): Where Can an Investor Find Yield Today?