The Southern Company (SO), Dominion Resources, Inc. (D): 3 Compelling Reasons to Pounce on This Electric Utility

When the markets are choppy, investing in income growth stocks proves to be a great strategy. The Southern Company (NYSE:SO) is one such income growth stock, which has been delivering steady returns in the form of stock appreciation and dividend pay-outs. But due to recent developments, its growth prospects have expanded and the company seems well-positioned to rally.

The Southern Company (NYSE:SO) is one of the largest electric utilities in the U.S., with over 43 GW of electricity generation capacity. It has around 35 GW of regulated, and around 8 GW of unregulated electricity generation capacity. The electric behemoth provides services in 12 countries, and has a market capitalization in excess of $39 billion.

The company generates electricity primarily from natural gas, coal, nuclear fission, and by harnessing hydro energy. Its respective allocations are shown below:

The Southern Company (NYSE:SO) has been gradually shifting towards natural gas fired electricity generation, which has led to annual fuel savings of $1 billion (as compared to FY11). But natural gas rigs are at historic lows, and yet, natural gas supply has outpaced its demand.

This suggests that gas prices won’t head north anytime soon, and management believes that its fuel savings will continue in FY13. The company could use these savings to repay is debt. Its short-term debt is a tad below $3 billion, and early extinguishment of $1 billion of debt should lead to annual savings of $40-$60 million (interest expenses).

For the recent quarter, the company posted an EPS of $0.44, 46% higher than last year’s quarter, and 10% higher than consensus estimates. Its revenue increased fractionally, which indicates that despite almost flat demand, the company was able to cut on its expenses. But on a sequential basis, input costs are increasing and management expects an EPS of $0.51 for Q1 and 4-6% earnings growth for FY13, down from 7%.

Shares of The Southern Company (NYSE:SO) carry a lucrative yield of 4.32%. Over the last 5 years, its dividends have increased around 16%, while its payout ratio has declined to 72%, down from 86% in 2009. As per the available data, the company has been paying out stable dividends since 1985, which has increased steadily since 2004. I highly doubt if the company would put a stop to its dividend payouts and jeopardize its legacy.

Its Kemper project and Vogtle units 3 and 4 are also coming off well. Kemper project is a 582 MW power plant, and will involve coal gasification. The process includes superheating coal and turning it into gas, which eventually makes it easier to control and remove toxic gases. Coal gasification is rapidly catching up, due to the rising environmental concerns and cheaply available coal.

Its Vogtle plant is also under development and on completion, the nuclear power plant would have a capacity of 2.34 GW. Altogether, this should boost its overall electricity generation capacity by 8.2%, leaving ample revenue growth potential at high utilization rates.

The above table may suggest that buying NextEra Energy would be a wise choice, as it’s cheap and its margins and yield are comparable to that of Southern Company. But the following charts present a different story altogether. 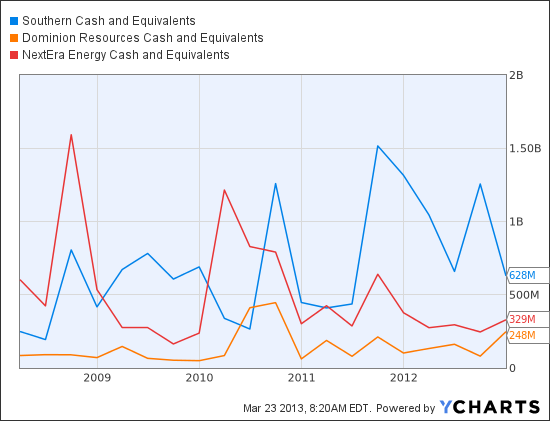 What Does the Deal Between Ameren Corp. (AEE) and Dynegy Inc. (DYN) Mean for...