The Southern Company (SO) Company Earnings: Should Its Dividend Die?

The Southern Company (NYSE:SO) reported earnings Wednesday, leaving investors with a mixed bag of lackluster sales but positive earnings. The world of utilities is changing fast, and the company’s ’90s-era energy portfolio has some investors questioning its future. Let’s take a look at this quarter’s earnings to see whether this stock’s a diamond in the rough or just plain coal.

Number crunching
The Southern Company (NYSE:SO)’s sales for this quarter came in at $3.7 billion, just 0.1% higher than in Q4 2011. Analysts had expected a 23% year-over-year increase to $4.5 billion . Although top-line revenue miffed Wall Street, the utility managed to make more with less for its bottom line. Net income jumped to $399 million, a solid 44% above 2011’s fourth quarter.

For shareholders, net income translates into diluted earnings of $0.44 per share, 10% higher than analysts had predicted . Over the past eight quarters, Southern has bested analyst estimates five times . For Q3 2012, diluted EPS came in 6.4% higher than in Q3 2011, but missed Wall Street expectations. According to Chairman, CEO, and President Thomas Fanning, the company generated more energy from natural gas than coal for the first time in its history. For 2012, that transition saved Southern approximately $1 billion in fuel savings .

In the company’s own words, its Q4 earnings growth was mostly due to “reduced non-fuel operations and maintenance expenses,” as well as “other retail revenue effects” (e.g., higher rates).

But Southern’s not sitting on its haunches. Since 2009, the company has spent over $4 billion each year to ramp up its nuclear efforts and build “clean coal” generation facilities . In the next two years, Southern plans to spend $16.5 billion in capital expenditures. The largest chunk ($4.2 billion) will go toward maintenance, while environmental spending ($3.6 billion) and new generation ($2.6 billion) also take significant pieces of Southern’s pie .

Dividend dynamite
Utilities have historically served as stalwart stocks for investors, but the days of sitting back and watching dividends deliver may be over. Southern’s shrinking revenue isn’t a quarterly fluke, it’s a sectorwide trend that’s likely to continue for at least the next 20 years. Energy portfolios and margins will make or break a company’s profits, and Southern will have to keep up its capital expenditures if it wants to remain cost competitive in the future.

Although the company has steadily increased its dividend over the past years, its suffering stock price has pushed its yield down in recent years from a 5.5% high in 2009 to its current 4.4% level. 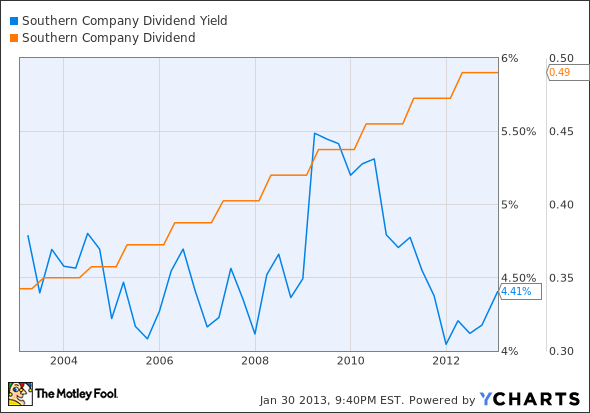 SO Dividend Yield data by YCharts.

In its most recent earnings report, Southern listed “excel at the fundamentals” as its top priority . But its ever-growing dividend seems to be on autopilot, which makes me question if the company is considering the most effective use of its capital. 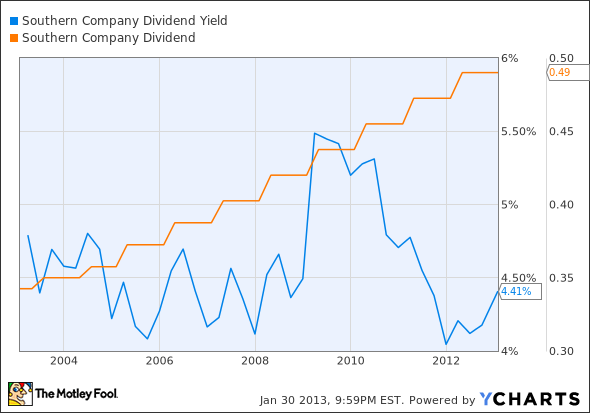 SO Dividend Yield data by YCharts.

Dividends are just one way to return value to shareholders, and Southern’s current dividend leaves less money for much-needed capital expenditures. Its 855% cash dividend payout ratio has left the company overextended, even as its latest earnings report promises 4% to 6% dividend growth in the years to come .

Foolish bottom line
Southern Company is in transition, and its gross profit margin to operating margin spread hints at a company with a fair amount of upside once capex upgrades kick in. But to get there, Southern needs to be spending wisely, and I’m unconvinced that management is putting long-term value ahead of short-term benefits. With an industry-average 17.6 P/E ratio and more expensive price-to-book and price-to-cash flow ratios , the utility’s stock isn’t exactly in the bargain bin, either. The company’s headed in the right direction and its Q4 results show promise, but I’m not ready to give Southern my thumbs-up just yet.

The article Southern Company Earnings: Should Its Dividend Die? originally appeared on Fool.com and is written by Justin Loiseau.

Fool contributor Justin Loiseau has no position in any stocks mentioned, but he does use electricity. You can follow him on Twitter, @TMFJLo, and on Motley Fool CAPS, @TMFJLo. The Motley Fool recommends Exelon and Southern Company.