The worries about the election and the ongoing uncertainty about the path of interest-rate increases have been keeping investors on the sidelines. Of course, most hedge funds and other asset managers have been underperforming main stock market indices since the middle of 2015. Interestingly though, smaller-cap stocks registered their best performance relative to the large-capitalization stocks since the end of the June quarter, suggesting that this may be the best time to take a cue from their stock picks. In fact, the Russell 2000 Index gained more than 15% since the beginning of the third quarter, while the Standard and Poor’s 500 benchmark returned less than 6%. This article will lay out and discuss the hedge fund and institutional investor sentiment towards Gridsum Holding Inc – ADR (NASDAQ:GSUM).

Gridsum Holding Inc – ADR (NASDAQ:GSUM) was in 17 hedge funds’ portfolios at the end of the third quarter of 2016, a fairly impressive figure given its size and the fact that its IPO was at the very tail end of the quarter. At the end of this article we will examine companies such as QLT Inc. (USA) (NASDAQ:QLTI), Papa Murphy’s Holdings Inc (NASDAQ:FRSH), and Consumer Portfolio Services, Inc. (NASDAQ:CPSS) to gather more data points in how hedge funds trade similar-sized stocks.

Heading into the fourth quarter of 2016, a total of 17 of the hedge funds tracked by Insider Monkey held long positions in this stock following the company’s late-September IPO. Those hedge funds held $48.22 million worth of GSUM stock, accounting for 43.80% of the float. Now then, let’s check out the select group of notable hedge fund managers who were taking positions in the stock in Q3. 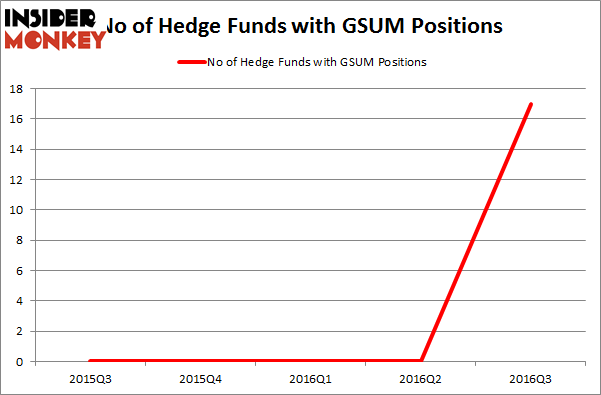 Of the funds tracked by Insider Monkey, Driehaus Capital, led by Richard Driehaus, holds the largest position in Gridsum Holding Inc – ADR (NASDAQ:GSUM). Driehaus Capital has an $18.4 million position in the stock. The second most bullish fund manager is Ken Hahn of Quentec Asset Management, with a $6 million position. Other peers that hold long positions encompass Brian Taylor’s Pine River Capital Management, John W. Moon’s Moon Capital, and Millennium Management, one of the 10 largest hedge funds in the world. We should note that none of these hedge funds are among our list of the 100 best performing hedge funds which is based on the performance of their 13F long positions in non-microcap stocks.