Over the past decade, Intel Corporation (NASDAQ:INTC) – the largest processor manufacturer in the world – devolved from a top tech stock into a textbook example of a mature one. When excitement and momentum leave a tech company such as Intel, stagnation, stock buybacks and dividends usually follow.

Although a company can’t grow revenue and earnings at double digits forever, it has to stay flexible in the face of rapidly shifting tides of technology – it must adapt or die. The problem is that when publicly traded tech companies become large cap behemoths, they develop a myopic quarter-to-quarter view that distorts the danger of disruptive trends.

That’s exactly where Intel is today, and the leader of that disruptive trend is British chip company ARM Holdings plc (NASDAQ:ARMH) . 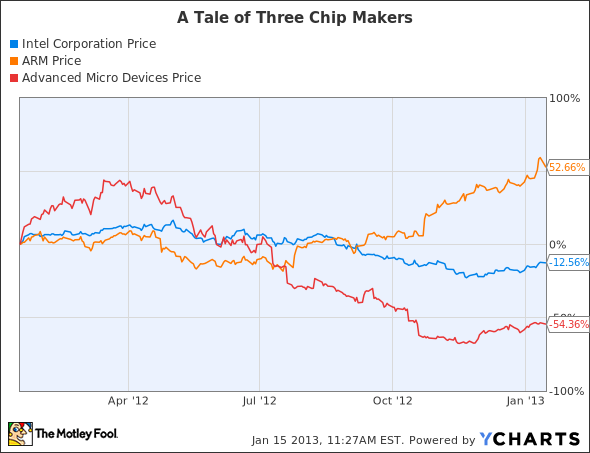 How did we get here?

Intel’s greatest failure over the past five years was completely missing the smartphone and tablet revolution, which started with Apple Inc. (NASDAQ:AAPL)’s seminal iPhone in 2007. Intel didn’t respond quickly enough to the market demand for lower-power chips which would prolong battery life on these devices.

Its initial response, the low-voltage Intel Atom, was targeted at netbooks, which Intel believed to be the natural successor to laptops. Unfortunately, Apple’s iPad in 2010 threw a curveball that added tablets into the equation. The Atom’s x86 architecture was always seen as a poor alternative to ARM processors, which still outperformed Intel’s chip in power consumption.

Investors should remember that ARM doesn’t manufacture chips – it only generates revenue from granting licenses to other companies. Companies pay ARM license fees to acquire intellectual property (IP) rights to develop its mobile chips – a factor that has contributed to ARM’s explosive growth over the past decade.

Intel’s current predicament stems from CEO Paul Otellini’s reluctance to accept ARM as a viable alternative processor to its aging x86 architecture – the same one that has evolved from Intel’s earliest chips in 1978.

Ironically, Intel once licensed ARM chips, which it sold as mobile and embedded XScale processors. Unfortunately, Otellini divested Intel’s ARM assets, which it sold to Marvell Technology for $600 million, one year prior to the release of the iPhone.

What happened next was a revolution – ARM chips captured 90% of the smartphone processor market, as well as 10% of the mobile computing market – which includes laptops, netbooks and tablets.

The writing’s on the wall

Just as the major Wintel PC makers – Hewlett Packard and Dell – neglected the rise of Apple and Samsung until it was too late, Intel refused to believe that its grasp of the PC market, that it has so easily dominated in the 1990s, was slipping fast.

However, two recent developments have shaken Intel investors to the core.

First, Microsoft Corporation (NASDAQ:MSFT) is offering two versions of its Surface tablet – a Windows 8 version that runs on a higher-powered Intel processor, and a cheaper Windows RT version that uses an ARM processor. Microsoft has apparently declared their long-time ‘Wintel’ marriage an open one.

Second, Apple is rumored to be considering dropping Intel processors from its entire line of laptops and desktops in favor of ARM’s upcoming 64-bit chips. To many analysts, this was an inevitability, since ARM chips already power Apple’s iPhones and iPads.