The Procter & Gamble Company (PG), Wal-Mart Stores, Inc. (WMT): Time for Investors to Break Out the Champagne? Not So Fast.

It’s official. The Dow Jones Industrial Average is trading at an all-time high. Investors are feeling richer as they excitedly double-check their 401(k) balances these days. But despite the giddiness, many Americans are downcast and discouraged. So why this is the case and what implication does it have for stocks?

Buzzkill
There are several reasons that investors are rethinking the resilience of the American consumer. Ever since the last Dow record-shattering took place in October 2007, median U.S. household incomes have dropped. And they continue to do so. Last Friday, the government reported a 3.6% drop in personal income during January.

When the payroll tax holiday party ended on Jan. 1, everyone took a roughly 2% cut in take-home pay. Compile that with higher gas prices and the delay in tax refunds and a broader picture comes into focus.

Not surprisingly, consumers are feeling pessimistic and, as a result, revising their spending plans. In January, an indicator of consumer sentiment unexpectedly deteriorated. That bad news was followed by a National Retail Federation survey that reported 70% of Americans were adjusting their spending plans as a result of the increased payroll tax.

Dealing with the pain
Despite the Dow’s recent achievement of reaching an all-time high, improvements in the job market, and the housing rebound, this despair may substantially slow growth for companies that rely heavily on our spending. When that spending slows, consumer goods companies feel the pain.

Last month, Wal-Mart Stores, Inc. (NYSE:WMT)’s leaked internal emails that referenced “disastrous sales” turned this negative sentiment into reality. While the retailing giant posted solid results for 2012 and raised its dividend by 18%, the company cautioned investors that it expects lackluster results for the current quarter.

Meanwhile, on last week’s fourth-quarter conference call, Target Corporation (NYSE:TGT) CEO Gregg Steinhafel told investors, “While there are some encouraging signs in the housing market, volatility in consumer confidence, the payroll tax increase, and the rise in the price of gas all present incremental headwinds.”

But while consumers can typically put off buying larger-ticket items like cars, they can’t do the same for toothpaste, soap, and diapers. Consumer staples companies reap the rewards of our dependency on these everyday items. In fact, several of these companies, like Target and The Procter & Gamble Company (NYSE:PG), have performed well recently. 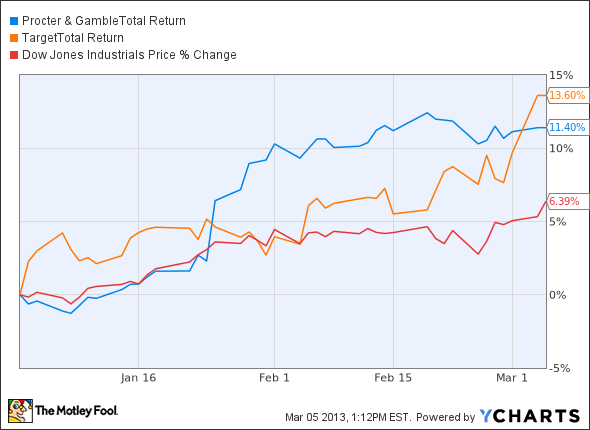 Despite deteriorating consumer sentiment, the stocks of these companies have returned roughly twice what the Dow has so far this year. Target has returned nearly 14% year to date, while The Procter & Gamble Company (NYSE:PG) is up more than 11% year to date.

Is the Sino-Google Inc (GOOG) Cold War Heating Up?