The Past, Present and Future of AOL, Inc. (AOL)

Few companies have transformed over the past two decades as much as AOL, Inc. (NYSE:AOL). Once the largest dial-up online service in the United States, the company nearly crumbled after its horrible marriage to Time Warner Inc (NYSE:TWX), only to be reborn as the one of the largest content farms on the Internet. Now, as AOL enters a new age, it is experimenting with hyperlocal news and partnering with Facebook Inc (NASDAQ:FB) for increased exposure to social media.

My dear investors, it’s time to visit the past, present and future of AOL to see if this resourceful icon of the Internet can keep growing in this decade of rapidly shifting advertising trends.

The Past: Welcome to the walled garden!

For those of us who remember getting online in the 1990s, America Online’s “walled garden” was synonymous with the Internet. Its “Welcome” and “You’ve got mail” greetings became so well known that they became the basis of a movie starring Tom Hanks and Meg Ryan in 1998.

By the dawn of the millennium, AOL, Inc. (NYSE:AOL) had over 20 million subscribers in the United States, and media giant Time Warner, eager to become one of the largest media conglomerates in the world, merged with the company in 2000. Right after that ill-fated merger, AOL’s total subscribers plunged from over 25 million to approximately six million between 2001 and 2009.

Infuriated by AOL’s continuous loss of subscribers, Time Warner gave up and spun off AOL in 2009, calling it “the biggest mistake in corporate history.” At that point, many people believed that AOL, Inc. (NYSE:AOL) was finished, destined to fade away and cataloged in the annals of Internet history somewhere between ARPANET and Facebook.

The Present: Welcome to the farm!

But AOL wouldn’t die. As an independent company, it evolved into a family of content-providing media websites, including TechCrunch and the Huffington Post, among others. By the end of 2012, AOL had invested $600 million in ‘content farms’ to drive traffic to its sites, which translated then into ad revenue. It invested heavily in legions of low-paid bloggers to churn out content recycled (or ‘aggregated’) from other news sites, with the goal of creating as many articles as possible.

In other words, it borrowed a play from Demand Media Inc (NYSE:DMD)’s content farm business model. However, it didn’t devolve completely into a sprawling content farm like Demand Media. AOL, Inc. (NYSE:AOL) still retained its portal website, which still has search, chat and e-mail capabilities, much like its fellow dot-com survivor Yahoo! Inc. (NASDAQ:YHOO). This has kept AOL set on a different growth trajectory than Demand Media, which does not have a portal website. Although Demand Media’s revenue growth looks impressive, it is far smaller than either AOL or Yahoo!, and is currently unprofitable. 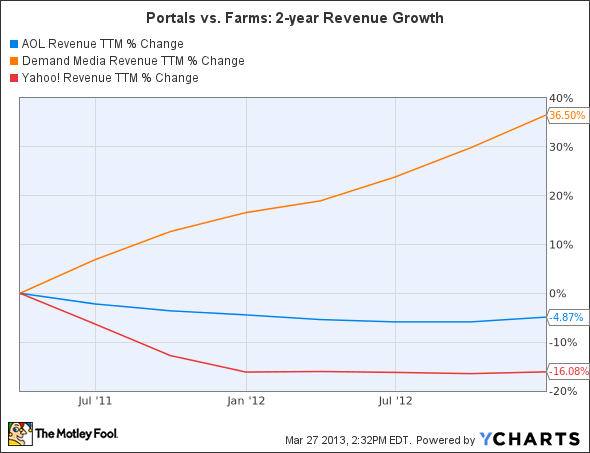 It’s also important to note that AOL’s dial-up subscription business – once its bread and butter – hasn’t died out yet. The business posted a 10% year-over-year decline to $174.2 million, but still accounts for 29% of AOL’s top line.