The New York Times Company (NYT): Are Hedge Funds Right About This Stock?

The financial regulations require hedge funds and wealthy investors that exceeded the $100 million equity holdings threshold to file a report that shows their positions at the end of every quarter. Even though it isn’t the intention, these filings to a certain extent level the playing field for ordinary investors. The latest round of 13F filings disclosed the funds’ positions on March 31st, about a week after the S&P 500 Index bottomed. We at Insider Monkey have made an extensive database of more than 821 of those established hedge funds and famous value investors’ filings. In this article, we analyze how these elite funds and prominent investors traded The New York Times Company (NYSE:NYT) based on those filings.

The New York Times Company (NYSE:NYT) was in 33 hedge funds’ portfolios at the end of March. NYT investors should be aware of a decrease in support from the world’s most elite money managers lately. There were 35 hedge funds in our database with NYT holdings at the end of the previous quarter. Our calculations also showed that NYT isn’t among the 30 most popular stocks among hedge funds (click for Q1 rankings and see the video for a quick look at the top 5 stocks).

Why do we pay any attention at all to hedge fund sentiment? Our research has shown that a select group of hedge fund holdings outperformed the S&P 500 ETFs by 51 percentage points since March 2017 (see the details here). We were also able to identify in advance a select group of hedge fund holdings that’ll significantly underperform the market. We have been tracking and sharing the list of these stocks since February 2017 and they lost 36% through May 18th. That’s why we believe hedge fund sentiment is an extremely useful indicator that investors should pay attention to.

At Insider Monkey we leave no stone unturned when looking for the next great investment idea. For example, 2020’s unprecedented market conditions provide us with the highest number of trading opportunities in a decade. So we are checking out trades like this one. We interview hedge fund managers and ask them about their best ideas. If you want to find out the best healthcare stock to buy right now, you can watch our latest hedge fund manager interview here. We read hedge fund investor letters and listen to stock pitches at hedge fund conferences. Our best call in 2020 was shorting the market when the S&P 500 was trading at 3150 after realizing the coronavirus pandemic’s significance before most investors. With all of this in mind we’re going to view the new hedge fund action encompassing The New York Times Company (NYSE:NYT). 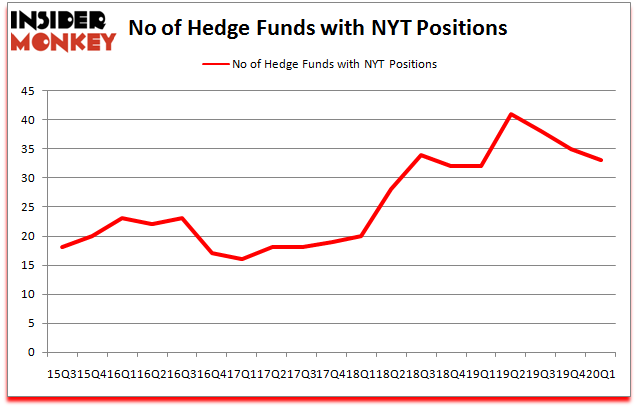 Among these funds, Darsana Capital Partners held the most valuable stake in The New York Times Company (NYSE:NYT), which was worth $399.2 million at the end of the third quarter. On the second spot was Renaissance Technologies which amassed $174.1 million worth of shares. Palestra Capital Management, SoMa Equity Partners, and Slate Path Capital were also very fond of the stock, becoming one of the largest hedge fund holders of the company. In terms of the portfolio weights assigned to each position Darsana Capital Partners allocated the biggest weight to The New York Times Company (NYSE:NYT), around 18.88% of its 13F portfolio. Shannon River Fund Management is also relatively very bullish on the stock, dishing out 12.8 percent of its 13F equity portfolio to NYT.

Since The New York Times Company (NYSE:NYT) has faced bearish sentiment from the entirety of the hedge funds we track, logic holds that there was a specific group of funds who were dropping their full holdings last quarter. Interestingly, Andrew Weiss’s Weiss Asset Management cut the largest position of the 750 funds monitored by Insider Monkey, comprising an estimated $30 million in stock, and Charles Lemonides’s Valueworks LLC was right behind this move, as the fund said goodbye to about $5 million worth. These bearish behaviors are interesting, as aggregate hedge fund interest dropped by 2 funds last quarter.

As you can see these stocks had an average of 30 hedge funds with bullish positions and the average amount invested in these stocks was $766 million. That figure was $1415 million in NYT’s case. Madison Square Garden Sports Corp. (NYSE:MSG) is the most popular stock in this table. On the other hand Ingredion Incorporated (NYSE:INGR) is the least popular one with only 18 bullish hedge fund positions. The New York Times Company (NYSE:NYT) is not the most popular stock in this group but hedge fund interest is still above average. Our calculations showed that top 10 most popular stocks among hedge funds returned 41.4% in 2019 and outperformed the S&P 500 ETF (SPY) by 10.1 percentage points. These stocks gained 8.3% in 2020 through the end of May but still beat the market by 13.2 percentage points. Hedge funds were also right about betting on NYT as the stock returned 28% in Q2 (through the end of May) and outperformed the market. Hedge funds were rewarded for their relative bullishness.