If you are an investor in the natural gas space, you have probably said these words to yourself more than once, thinking about the price of natural gas. There are several logical arguments that would justify such a statement. Unfortunately, it looks like some of those arguments are being thrown out the window.

Natural gas is in unprecedented territory, and here’s why.

Apparently, not all BTUs are created equal
Generally speaking, the value of both oil and gas are based on their energy potential. When we burn these type of fuels, they emit a certain amount of energy, which is measured in British Thermal Units, or BTUs. In a similar way to how the amount of alcohol in a can of beer is different then if that can was full of whiskey, the amount of energy in the standard measure of oil is greater than the standard measure of natural gas. The standard ratio is that one barrel of oil is equal to about 6,000 cubic feet of natural gas. This is known as the BOE equivalent rate.

If the energy density of oil is about six times greater, then the BOE equivalent rate should be about 6:1, right? For years, this trend had generally held true: 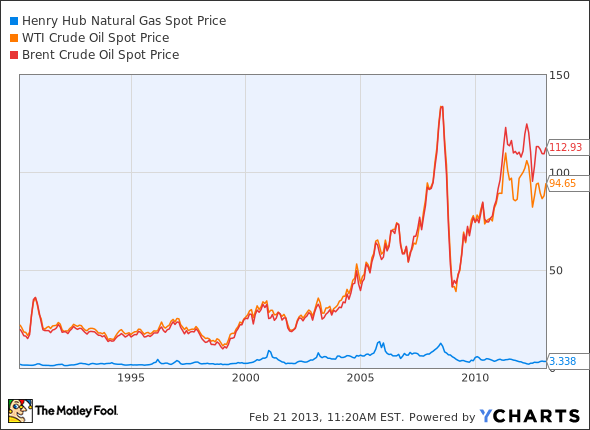 Thanks to new drilling technology, though, U.S. gas production took off. All of a sudden, the country was producing gas at such a rapid pace, the market could not keep up with the supply. This has sent gas prices tumbling all the way to decade lows, and the BOE equivalent rate went way out of sync. With prices low and natural gas E&P companies struggling, some value investors saw this as an opportunity to gobble up some deeply discounted companies under the premise that natural gas prices would return to the BOE equivalent rate. Heck, even I made a case for it.

Those who have held onto the BOE equivalent rate are in for a bit of bad news. During Devon Energy Corporation (NYSE:DVN)’s recent conference call, Devon CEO John Richels said that he believes that you can no longer use that rate as a fair assessment for natural gas prices:

Given the sustained divergence in the value of oil and natural gas, it’s become pretty obvious to just about everyone that the energy equivalent BOE conversion rate of 6:1 has been rendered meaningless from an economic perspective. Based on the current price realizations of our oil and gas mix, a value or price equivalent is a much more meaningful way to evaluate growth in the value of a hydrocarbon stream.

So much for BOE parity. In retrospect, this should be a little less of a surprise. Several big natural gas players such as Chesapeake Energy Corporation (NYSE:CHK) and Linn Energy LLC (NASDAQ:LINE) have spent much of the past few quarters reducing their exposure to natural gas, and more to oil. Chesapeake has done a rather commendable job of increasing liquids production by 41,000 barrels per day, and Linn has done what it does best … buy things. It just recently announced the acquisition of Berry Petroleum Company (NYSE:BRY), which has a 75% oil portfolio.