The Most Valuable Losers

Back in the days of the first tech boom from 1996 through 2000, a new phenomenon arose. Companies were going public with no history of earnings, in fact, many went public with significant losses. This was seen as quite an innovation at the time. From today’s perspective that all seems so quaint. Now companies not only go public with losses than can continue to lose money on an annual, generally accepted accounting principles (GAAP), basis for years while valuation continues to soar. In light of this development, we at Cornell Capital Group decided to put together a list of the most valuable companies that had never made a full fiscal year GAAP profit in their entire life.

The list is contained in the table below. To keep it manageable we cut it off at companies with a market capitalization of at least $10 billion. Not surprisingly, the list of the most valuable losers starts with Tesla INc (NASDAQ:TSLA). Despite having gone public a decade ago, Tesla has never earned a full-year profit. (Although it may make it this year.) Despite this history of losses, Tesla has a market cap of over $144 billion, making it one of the more valuable companies in the world.

Not far behind it is Shopify, which despite a record of continuing losses, is now the most valuable company in Canada as measured by market capitalization. To be fair, many of the companies on the list went public more recently than Tesla or Spotify Inc (SHOP) and, therefore, have shorter histories of losses. Nonetheless, the failure to make a profit, including the time they were private, has hardly been an impediment to their continued lofty valuations. 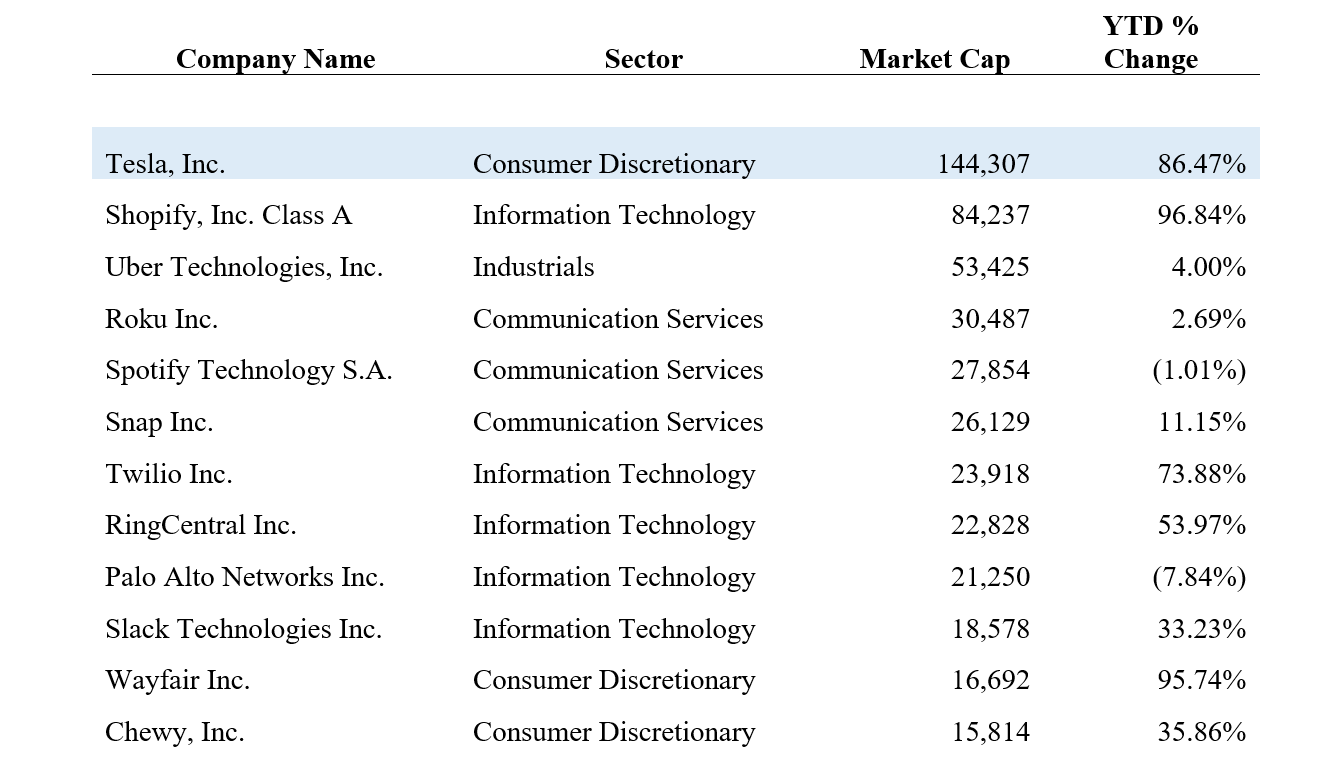 It comes as no surprise that all of the valuable losers are in tech. Although Tesla, Wayfair (W) and Chewy (CHWY), are categorized as consumer discretionary, they are all clearly thought of as tech-based companies. The same is true of Uber, despite the fact that it is categorized as an industrial. It is clear that the market is giving these profitless companies the values it is because of the growth options associated with their technology roots.

The Market Is Myopic

The list lays further waste to the claim that I have argued against in the past that the market is myopic and focuses on current earnings. It is hard to rationalize the value of any of the companies on the list in terms of current earnings because there have never been any. The market is clearly looking into the distant future to value all of the companies on the list at the levels it does.

What is perhaps most striking about the list is how the market valuations have been affected by the Covid-19 crisis. Rather than falling with the market, most of the loveable losers have risen sharply during 2020. Remarkably, Tesla, Shopify and Wayfair are up almost 100% year-to-date.

In fact, Wayfair initially fell to $21.70 at the start of the crisis and has since rocketed up 775% to approximately $190 in the course of about two months. Most of the other companies are up substantially as well and none are down as much as the overall market. One explanation for this is that the market believes that the Covid-19 crisis has accelerated the rate of economic transformation and has, thereby, moved up the time at which the loveable losers will be able to exploit their growth options.

It is hard to know what this means for investors. Should you buy any of the companies on the list? If you are a value investor, then the best answer is probably the one Mr. Warren Buffett gave when asked if he would invest in Tesla. He answered simply, “No.” Of course, it all depends on how quickly and the extent to which the companies on the list can dominate and transform their markets. Once upon a time Amazon looked like a loveable loser and it now has a market capitalization of over $1 trillion. But Amazon is the exception, not the rule. The key unknown is the role of competition.

Currently, on a market capitalization basis, Tesla is worth more than the combined values of GM, Ford, Chrysler-Fiat, Honda, BMW, and Daimler. And all of that without one profitable year thus far. The same situation holds in most of the other markets as well. If there are not sufficient barriers to entry to exclude future competition, then all of the companies on the list are likely overvalued.