The Men’s Wearhouse, Inc. (MW): You Should Worry About This Retailer

On June 19 the board of directors of apparel retailer The Men’s Wearhouse, Inc. (NYSE:MW) abruptly fired its Executive Chairman and Founder George Zimmer. Management turnover is never a good sign for a company’s prospects. If you’re an investor you need to worry.

The short answer is: Who knows?

The firing of the well-known business figure famous for his catch phrase, “You’re going to like the way you look – I guarantee it” remains a mystery in the investment world as of this writing.

The fundamentals of the company have improved fairly steadily in recent years. Revenue and free cash flow increased 18% and 30% respectively over the past five years. Operating margins and profit margins held steady at 8% and 5% respectively since 2011.

Men’s Wearhouse delivered excellent results in its most recent quarter. Revenue and free cash flow increased 5% and 31% respectively. Cash as a percentage of stockholder’s equity increased from 12% to 14%.

In addition, George Zimmer provided face recognition and a catch phrase that consumers can identify with thereby adding to The Men’s Wearhouse, Inc. (NYSE:MW)’s brand identity.

In the chart below, you can see that Men’s Wearhouse gave up a total return more than tripling the market over the past five years. 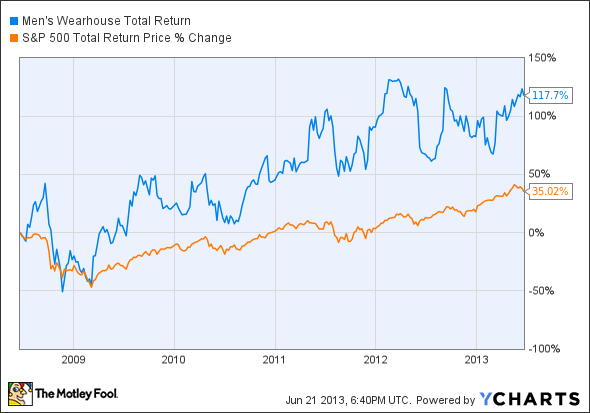 One popular theory resides in Mr. Zimmer’s disagreements with Men’s Wearhouse’s board of directors, specifically Zimmer’s “hand-picked” CEO Douglas Ewert who became CEO in 2011 after George Zimmer gave up the role.

The financial media repeatedly quotes George Zimmer as saying, “Over the past several months I have expressed my concerns to the board about the direction the company is currently heading…Instead of fostering the kind of dialogue in the boardroom that has, in part, contributed to our success, the board has inappropriately chosen to silence my concerns by terminating me as an executive officer.”

One possible focal point of the disagreement could reside in the poor performance of the Moores and K&G subsidiary. While overall sales increased 5% in its most recent quarter, sales of Moores and K&G decreased 3% and 6% respectively. This could account for the “my concerns to the board about the direction the company is currently heading” portion of Mr. Zimmer’s quote.

The competitive pressures in the retail sector remain immense. Any given retailer deals with multiple competitors. The managers of these companies sometimes take drastic measures to compete effectively. Some speculate that George Zimmer appeals to an older generation on its way out in terms of spending and life and that The Men’s Wearhouse, Inc. (NYSE:MW) needs to adapt its image to the younger generation such as the Gen X and Millennial demographic.