The Men’s Wearhouse, Inc. (MW), Jos. A. Bank Clothiers Inc (JOSB): This Stock Is Dressing Up

The run up was due to the news that shows that Men’s Wearhouse has engaged Jefferies to evaluate strategic alternatives for its K&G operations. A sale of the division would be a big positive for the company, which would lead to higher profitability and a higher valuation.

Its January-end quarterly results came in at a $0.07 loss per share, below consensus estimate of a $0.03 per share loss. This was due in part to K&G. Comps at The Men’s Wearhouse, Inc. (NYSE:MW) were up 1% year over year, but comps at K&G fell 5.7%. K&G accounts for over 15% of sales, and continues to be a big drag on the company.

Consensus is calling for company wide sales to be up 5% for fiscal year 2013 (ending January), then 4% in 2014; this despite the expected weakness in its K&G segment. Imagine what Men’s Wearhouse could do without the drag of K&G.

Economic uncertainty has played its part in pressurizing all the major retailers. However, The Men’s Wearhouse, Inc. (NYSE:MW) has managed to hedge some of this slowness with new product introductions, that include its growing tuxedo rental and big-n-tall business lines (check out a SWOT on Men’s Wearehouse).

Men’s Wearhouse’s most formidable opponent, Jos. A. Bank Clothiers Inc (NASDAQ:JOSB), has traded in tandem with The Men’s Wearhouse, Inc. (NYSE:MW) over the past twelve months… 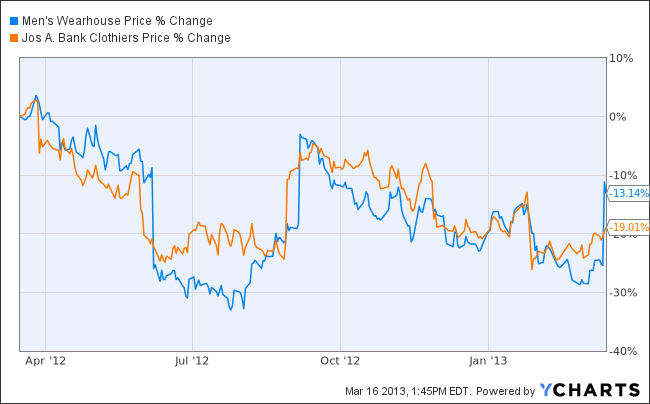 How are other specialty retailers doing?

Express posted EPS of $0.75 last quarter, compared to $0.68 for the same quarter last year, which was driven by 1.5% higher same-store sales, and 8% higher total sales. Express also believes that its first quarter 2013 comp sales, including e-commerce, will continue to grow in the low single digits, compared to an increase of 4% in the first quarter of 2012.