Some stocks like The J.M. Smucker Company (NYSE:SJM) and The Home Depot, Inc. (NYSE:HD) keep ratcheting higher with no end in sight. Is it possible that every man, woman, and child in America is pounding down coffee or pounding nails? J.M. Smucker is up 32% over the last year.

Four days of constant rain made me realize why Starbucks started in Seattle and why J.M. Smucker became a pantry powerhouse soon after it bought Folger’s coffee from The Procter & Gamble Company (NYSE:PG) for $3 billion in 2008. Since its dip during the 2009 recession and time to close the deal its stock is up 92%. America runs on coffee and J.M. Smucker knows it. 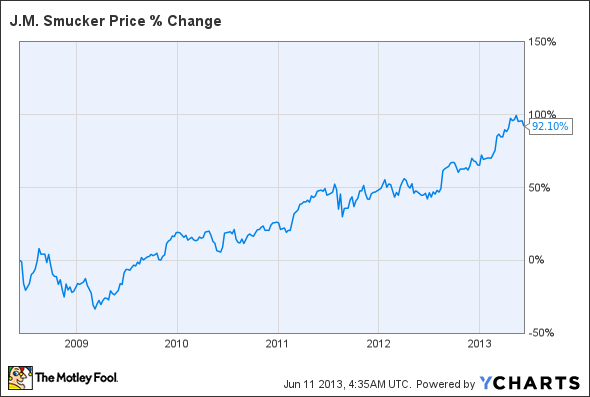 The J.M. Smucker Company (NYSE:SJM) had made many strategic acquisitions but none that boosted the company’s stock more. Coffee is the biggest revenue driver for J.M. Smucker. They own number-one brand Folger’s, Cafe Bustelo, home-use Dunkin Donuts, Medaglia D’Oro, Millstone, Pilon espresso, and Kava, an acid-neutralized coffee for people with tummy troubles… virtually a coffee for coffee aficionados of every stripe.

For most of the period between 1995 and 2005 the stock barely moved. The family-founded and family-run company nestled at One Strawberry Lane in Orrville, OH might have just as well been the setting for a latter day Our Town revival. But  this fourth generation of family management had 21st century ideas of expansion beyond their jams and jellies in the iconic gingham patterned jars. Delicious strawberry jam, by the way.

The company was buying smaller companies from 1963 until 2008 making up the majority of its new brand portfolio with purchases of juices, Crisco, Pillsbury, Jif peanut butter, (obviously a marriage made in heaven for a jelly company), Carnation, and many more pantry products. But it was Folger’s that really changed the company’s fortunes.

Since then its major purchases have been coffee related with the 2011 acquisition of Sara Lee’s North American coffee and tea foodservice operations and coffee brands Millstone Coffee and Rowland Roasters in 2010.

Despite analysts continually raising expectations The J.M. Smucker Company (NYSE:SJM) has managed to consistently surprise. The company reported fourth quarter earnings on June 6 meeting on revenue but beating on earnings, a 31% improvement on GAAP EPS of $1.22. Operating, gross, and net margins all expanded. Free cash flow increased 40% for 2013 to $649 million.

Still, revenues were a little soft and analysts worried about The J.M. Smucker Company (NYSE:SJM)’s slowing growth for its K-cup coffee business, although the company said it is still bullish on K-Cups and will debut two varieties this year. A most interesting nugget from the call was that sales of specialty coffee brands Cafe Bustelo and Pilon, aimed at the Hispanic market and those who like a stronger brew, were up in the mid-teens while Folgers’ sales were only up 3%. Folgers was named the Coffee Brand of the Year by the 2013 Harris Poll.

CEO Richard Smucker noted that 70 new products had been introduced, mentioning in particular the Jif Hazelnut brand, similar to the very popular Nutella. One hundred more new products are planned for 2014. Also he boasted the five year CAGR for sales was 18% and earnings were 11%, far above their own anticipated 6% and 8%.

The J.M. Smucker Company (NYSE:SJM) currently trades at a trailing 20 P/E and offers a 2.10% yield. Dividends have been  increased annually, usually announced in the summer.  Last year it was increased 9% and the company also bought back 4% of shares.

Mondelez International Inc (NASDAQ:MDLZ) is the second largest global coffee producer and this is where it really goes head to head with The J.M. Smucker Company (NYSE:SJM). It has its own Tassimo coffee machine challenging both Nestle’s Nespresso and the Keurig.