Home builders and developers do much more than stick a few pieces of wood in the ground. From the exploration of a new market to the selling of the last house, homebuilding’s a lengthy and involved process. The crucial decision of what market to enter guides a company for years.

KB Home (NYSE:KBH) has decided to focus on high growth areas like California and Florida. These markets experience bouts of strong growth, but an overreliance on such areas may subject the company to great volatility. In addition to these factors, the macro picture for home builders is mixed over the long run. Other builders offer growth prospects and a greater degree of geographical diversification. 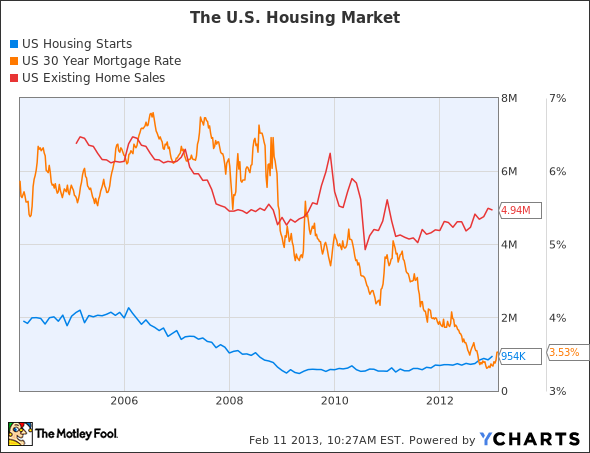 US Housing Starts data by YCharts

The majority of KB Home’s inventory is found in California. This state has high taxes and one of the highest unemployment rates. Based on Q3 2012 data, the central states of Colorado and Texas and the Southeastern states of Florida, Maryland, Virginia, and North Carolina each carry about 17% of land and land development investment. During the recent boom years, California and Florida became infamous for their amount of overbuilding. The changing climate and increasing hurricane activity will be a negative factor in these the Southeast markets.

Other factors decrease the attractiveness of KB Home. The company has a total debt-to-equity ratio of 4.57, much larger than that of their competitors. This shows that the company has a large amount of debt that could worsen future cash flow issues. On a valuation basis, the company is not a strong buy. It currently trades at a price-to-book ratio around 3.8, which means investors are paying more for KB Home’s assets than for those of their competitors.

What about the competition?

Brookfield Residential Properties Inc (TSE:BRP) operates in the U.S. and Canada. It is based in Calgary, Alberta, Canada and offers significant diversification out of the U.S. market. Froth in the Canadian housing bubble is real, but it is critical to recognize the importance of geographical differences.

For years, Vancouver has been outrageously expensive, and it is prudent that Brookfield does not operate in this market. Its Canadian markets are Calgary, Edmonton, and Toronto. The economies of Calgary and Edmonton are built on energy, and the continued growth in the oil sands forms strong underlying support. Toronto and the province of Ontario have not grown as strongly as Alberta, but Toronto has a number of financial and mining firms headquartered in the city that support the local economy. In America, Brookfield focuses on California, Washington D.C., Austin, and Denver.