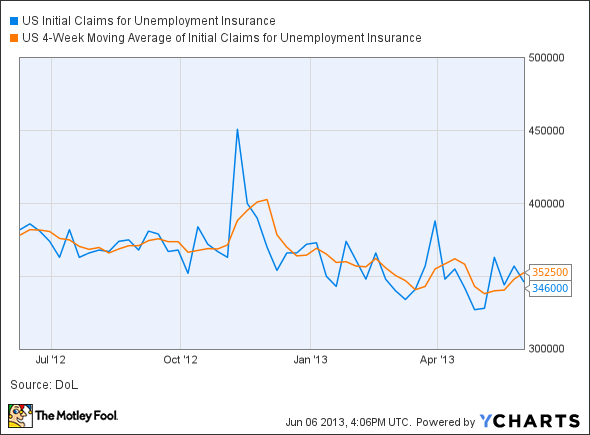 After averaging 370,000 last year, new unemployment claims have been slowly trending downward — a positive for the economy. Hiring, however, has been in a rut so far this year. The economy added just 165,000 jobs in April. Yesterday’s private-sector jobs report from ADP disappointed, pushing Dow stocks down. Economists expect a similarly underwhelming jobs report for May, which the government reports tomorrow.

Today’s Dow leader
Today’s Dow leader is The Home Depot, Inc. (NYSE:HD), up 2%. The Home Depot, Inc. (NYSE:HD) has been gaining on the strength of the recovering housing market, which has seen both home prices and activity on the rise. Rising home prices are good for the economy, as many homeowners are still underwater on their mortgages, restricting their ability to move to where opportunities are. Investors have taken notice of the recovering housing market and have bid up many related stocks, but some opportunities still remain.

Second for the Dow today is Verizon Communications Inc. (NYSE:VZ), up 2.3% after the Guardian published documents showing that the NSA is collecting all phone records of Verizon Communications Inc. (NYSE:VZ) customers. While some are outraged, many have been warning about this for some time, and the public hasn’t taken notice. According to Reuters, Attorney General Eric Holder said members of Congress were fully aware of the program, while Senator Dianne Feinstein told CNN, “As far as I know, this is the exact three-month renewal of what has been the case for the past seven years.”

Investors are ignoring the news today, bidding Verizon Communications Inc. (NYSE:VZ) up along with the telecom sector and other traditionally defensive sectors including utilities and health care stocks. Investors are attracted to Verizon Communications Inc. (NYSE:VZ)’s strong position in the U.S. wireless market, as well as its 4.2% dividend yield.

The article These 2 Stocks Are Beating the Dow originally appeared on Fool.com and is written by Dan Dzombak.

Dan Dzombak can be found on Twitter @DanDzombak or on his Facebook page, DanDzombak.He has no position in any stocks mentioned. The Motley Fool recommends Home Depot.