The market has had an interesting dynamic this year in which bad economic news is good news for the market, as it means the Federal Reserve will keep its asset purchases going longer. Last Friday the market finished higher after new-home sales in July came in far below analyst expectations. The worse-than-expected housing-market data lowers the likelihood that the Fed will taper its asset purchases, which is positive for the market. There was one U.S. economic release today, and it was also worse than expected.

Durable-goods orders dropped a seasonally adjusted 7.3% in July, falling short of analyst expectations of a 4.9% drop and June’s 3.9% rise. The decline was expected, as Boeing‘s orders dropped from 287 in June to just 90 in July. Excluding the volatile transportation sector, orders were down a seasonally adjusted 0.6%, worse than June’s 0.1% rise. 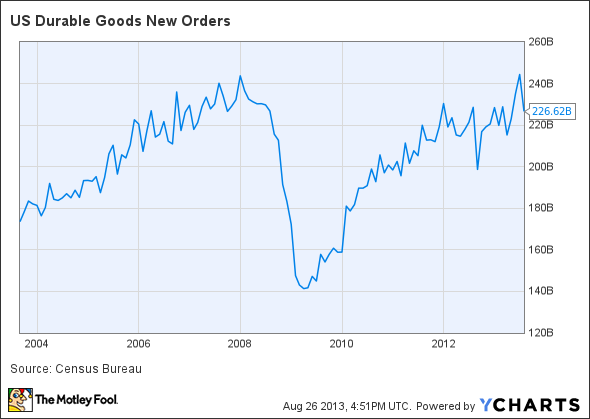 New orders dropped in various manufacturing sectors, suggesting the economy is not so strong as previously thought. Given the sour data, investors believe the Fed will stick to its quantitative-easing policy longer. Jeffrey Lacker, president of the Federal Reserve Bank of Richmond, has described the “tapering” of QE thus: “The Federal Reserve is not only leaving the punch bowl in place, we’re continuing to spike the punch, though at a decreasing rate over the next year.”

So what can an investor do in times like this? It’s hard to stay sober while everyone around you is drunk on Fed-stimulus punch. My advice: Keep learning, focus on your goals, have an investing plan, stick to it, and ignore the crowds.

The article Home Depot Stock Leads the Dow Higher originally appeared on Fool.com and is written by Dan Dzombak.

Dan Dzombak has no position in any stocks mentioned. The Motley Fool recommends Home Depot.