The recent quarterly report by Lowe’s Companies, Inc. (NYSE:LOW) sent the stock surging to multiyear highs. Most investors were caught off guard, as results from competitors didn’t suggest the results would be this strong. So what metric could’ve helped investors see this strong performance coming?

One metric commonly ignored during the weak stock years that began in 2000 and ended with the financial crisis was the net buyback yield. The net buyback yield is calculated by adding the net buybacks over the previous four quarters and dividing by the current market cap. Investors have commonly favored the dividend yield and ignored the buyback as the decade of weak stock results tended to negatively skew the benefits of reducing the share count.

The second-largest home improvement retailer in the world has 1,758 stores in the United States, Canada, and Mexico. The company is only second to The Home Depot, Inc. (NYSE:HD) in the home improvement category and competes against Sears Holdings Corporation (NASDAQ:SHLD) in many categories, such as appliances. Last year, were investors attracted to the higher dividend with Home Depot looking in the wrong direction? Could investors paying attention to the huge net buybacks at Lowe’s Companies, Inc. (NYSE:LOW) have predicted the strong stock rebound over the last year?

As the chart below shows, Lowe’s has had an incredible 70% return in the last year. 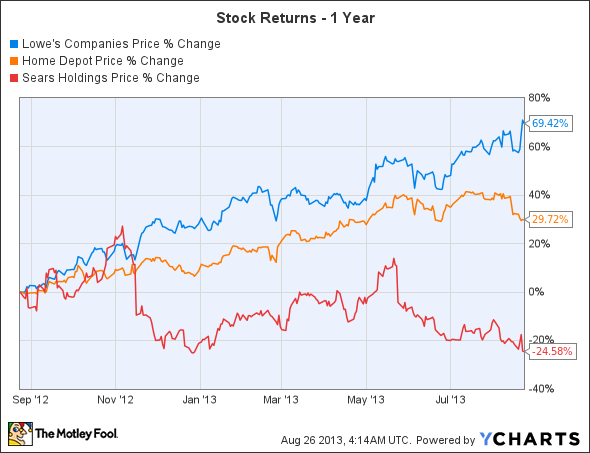 The returns easily exceeded the gains from both market leader The Home Depot, Inc. (NYSE:HD) and struggling Sears Holdings Corporation (NASDAQ:SHLD). Could anything have predicted these returns? The much-overlooked metric is the net buyback yield. Even with a dividend-focused market over the last couple of years, the lower-yielding Lowe’s Companies, Inc. (NYSE:LOW) has easily outperformed the solid dividend of Home Depot. As the chart below shows, Lowe’s had a significantly higher net buyback yield during mid-year 2012, but now that yield is shifting back toward an equal rating with Home Depot, suggesting a shift could be taking place. 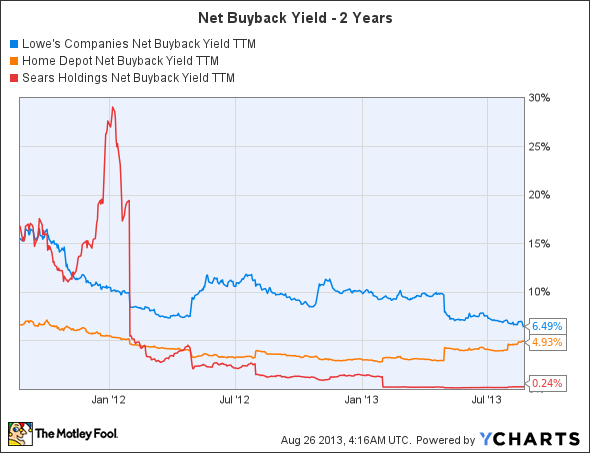 Research shows that the largest net buybacks can outperform the market. Why not glean insights from management’s potential signals with share repurchases? The key is that the net buyback has to be of enough scale to signal the value of the stock. The buyback needs to provide a meaningful reduction of shares in the 5 to 10% range to be worth following.

Aftermarket leader The Home Depot, Inc. (NYSE:HD) reported comps of 10.7%, investors were caught off guard that Lowe’s Companies, Inc. (NYSE:LOW) was able to nearly match it with an incredible 9.6% increase in comp sales. Earnings increased an even more incredible 38% as improved margins combined with a lower share count helped boost earnings.

The more crucial part is that Lowe’s Companies, Inc. (NYSE:LOW) bought back $1 billion worth of stock in both quarters this year. While solid amounts, the 70% gain in the stock over the last year makes it difficult for the current buybacks to match the greater than 10% net buyback yields from last year. The buybacks would have to increase 70% to keep up with the increased market cap to obtain the same yields.

Home Depot is no slouch

The home improvement retail leader has 2,258 stores and saw revenue increase 9.5% and earnings per share surge 22.8%. Similar to Lowe’s, The Home Depot, Inc. (NYSE:HD) is spending a significant amount of capital on share buybacks. However, the company really relaxed the amounts at the end of 2012, with only a net of $1.1 billion spent during the last two quarters. Now though, the company has spent an impressive $4.3 billion in the first two quarters of the year, with the intention of adding another $2.2 billion over the remainder of the year. In total, the buyback yield would equal nearly 6.5%, and combined with the 2.1% dividend yield, it creates an impressive 8.6% returned to shareholders during 2013.