There was one U.S. economic releases today. The National Association of Realtors reported seasonally adjusted existing-home sales of 4.97 million. While slightly below analyst forecasts of 5 million, it is still the highest level since 2010. 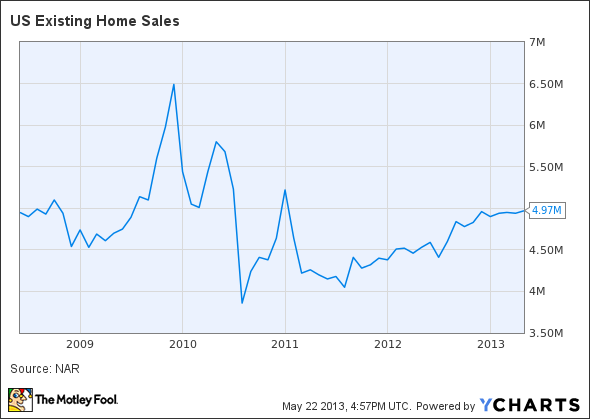 The big thing on investors’ minds is what the Fed plans to do about QE3. Currently, the Federal Reserve is buying $45 billion of long-term Treasuries and $40 billion of mortgage-backed securities each month. The Fed has said it will continue the program indefinitely until inflation rises past its target of 2% or until unemployment drops below 6.5%. As unemployment continues to fall — it was most recently measured at 7.5% — investors are worried about how the Fed plans to end or taper the program.

Investors were hoping to gain more information from Fed Chairman Ben Bernanke’s testimony before the congressional Joint Economic Committee this morning, but the scoop actually came much earlier and from a different source. New York Federal Reserve President William Dudley said in an interview on Bloomberg TV, “Three or four months from now I think you’re going to have a much better sense of, is the economy healthy enough to overcome the fiscal drag or not.”

That was much more enlightening than Bernanke’s testimony. Bernanke didn’t shed much light on the Fed’s thinking. In his prepared remarks, he largely just reiterated what everyone already knows, saying, “A premature tightening of monetary policy could lead interest rates to rise temporarily but would also carry a substantial risk of slowing or ending the economic recovery and causing inflation to fall further.” In response to later questions Bernanke was noncommittal: “In the next few meetings, we could take a step down in our pace of purchase.”

Another opportunity for more information comes at 2 p.m. EDT today, when the Fed releases minutes from the May 1 FOMC meeting. We’ll have to wait and see what those hold. They are unlikely to tell us anything new, as the Federal Reserve members have been quite outspoken lately. For the time being, though, QE3 continues. The next FOMC meeting will be held on June 18 and June 19, which is when any potential shift would happen.