Investing in anticipation of a housing recovery has been one of the best trades of the last year, but with things like the home improvement stores The Home Depot, Inc. (NYSE:HD) and Lowe’s Companies, Inc. (NYSE:LOW) hitting new highs is it time to start thinking about reducing your weighting in the sector?

My rationale in asking this question is not to question the validity of the housing recovery but rather to highlight the fact that there may well be other stocks related to it that are have better valuations. Moreover a recovery in the U.S. housing market usually precedes recoveries in other areas of the economy where investors may find investment opportunities.

The Home Depot, Inc. (NYSE:HD)’s recent results were certainly better received–initially at least–than Lowe’s Companies, Inc. (NYSE:LOW), but no matter; both stocks rose afterwards. The truth is that the market has woken up to the housing recovery and wants a piece of investing in it. As for the results, Home Depot continued its recent tradition of raising full year guidance.

Here is how Home Depot has tended to hike guidance over the last few years. As the housing recovery as strengthened so The Home Depot, Inc. (NYSE:HD) has continued to upgrade its full year revenue estimates. It is now three quarters in a row that it has done this, and in this set of results it noted that its pro business had started to grow quicker than its consumer business. This is a positive sign of recovery, as pro sales are seen as more discretionary-based.

Furthermore the recovery it is seeing in its end markets is becoming geographically spread with areas that were at the epicenter of the housing crisis (California, Florida, Arizona, etc) starting to recover as well.

With that said there were some challenges in the quarter with the spring weather starting a lot later than last year. This made comparables for things like garden and outdoor products a lot lower for The Home Depot, Inc. (NYSE:HD). However, it said that April saw a strong snap back in growth following a weak March, and May is similarly strong so far.

It was a similar story with Lowe’s Companies, Inc. (NYSE:LOW). It reported comparables down 10% in March, with April rising 10% and May continuing the positive momentum. In addition, the weather affected its outdoor comparables so that they were down 7%, with indoor rising 3%.

In fact the message from the macro front was pretty much the same. The key operational difference between the two is that Lowe’s has execution risk/return from its reset program. I’ve discussed this initiative in more length in a previous article. Lowe’s Companies, Inc. (NYSE:LOW) is aiming to complete the resets by the end of the year and announced that the percentage increased from 30% to 50% in this quarter. Unfortunately the weather effects helped to ensure that inventory normalization only increased from 20% to 30%, but if what both these companies are saying comes true, then this number should increase in future for Lowe’s.

A note of caution

In summary, both these stocks have upside from a recovering housing market and upside prospects in the current quarter as spring weather finally kicks in. Moreover, Lowe’s Companies, Inc. (NYSE:LOW) should see some upside potential as the benefit of the resets drops into the bottom line. So, why the note of caution?

My only concern here is that these stocks have come a long way, and now most investors will have somewhat priced in a housing recovery. A look at their evaluations suggests that they are at levels above what they were when the housing industry entered a recession in 2006. 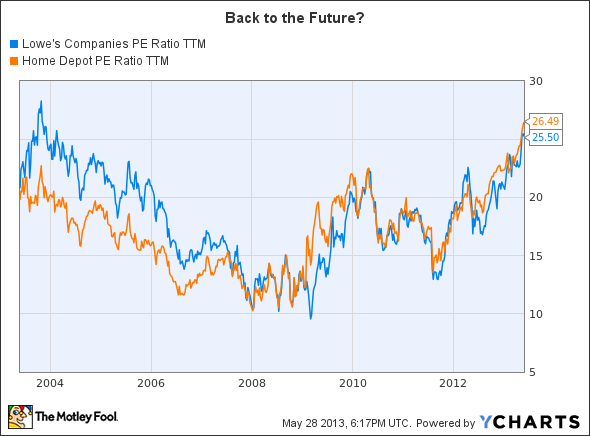 Frankly I think that momentum and ongoing positive news on housing is going to take these stocks higher. However, investing is about trying to find the optimal ways to generate returns from your views. With this in mind I think it is time to look beyond the evaluations at the home improvement stores and look at some of the wider housing and construction plays.

Housing recoveries usually predate construction related improvements. New housing projects get developed which leads to new commercial construction. In this regard I think Whirlpool Corporation (NYSE:WHR) and Stanley Black & Decker, Inc. (NYSE:SWK). The interesting thing about Whirlpool is that it offers upside from its push to increase margins. Given that home improvement stores are reporting good numbers it is reasonable to expect that Whirlpool will see a strong spring too. Moreover, we are hitting the 10 year anniversary of the peak of the housing boom so the replacement cycle should start to kick in soon as well. The stock trades on a forward PE of 13.3x and traditionally generates large cash flows.

Turning to Stanley Black & Decker, Inc. (NYSE:SWK), this stock has upside potential from a housing recovery and a strategic growth initiative with which it intends to generate growth via expanding in selected verticals while benefiting from ongoing merger synergies.

Its recent results were a bit disappointing, but like Whirlpool Corporation (NYSE:WHR) it was affected by some temporary weakness in Latin America (both companies argued that it will rectify in future quarters) and from the weather effects of a late spring. At the time of both these companies results I was slightly skeptical over the weather argument but now that The Home Depot, Inc. (NYSE:HD) and Lowe’s Companies, Inc. (NYSE:LOW) have confirmed its effect and, more importantly, argued strongly that growth will come back.I think this is a good sign for Stanley Black & Decker. Moreover the stock trades on trades on a forward PE ratio of 14.6x and is forecasting $1 billion in free cash flow this year.

Lee Samaha has no position in any stocks mentioned. The Motley Fool recommends Home Depot and Lowe’s. Lee is a member of The Motley Fool Blog Network — entries represent the personal opinion of the blogger and are not formally edited.

The article Finding Value in the Housing Sector originally appeared on Fool.com and is written by Lee Samaha.