The U.S. housing market recovery, although uneven, appears to be in full swing. Home prices nationwide are up about 12% over the past year, and certain markets are booming. The recent results from the two big home improvement stores, The Home Depot, Inc. (NYSE:HD) and Lowe’s Companies, Inc. (NYSE:LOW), provide further evidence that housing is no longer in the doldrums. But should you go out and buy shares in these two companies? Or has the housing recovery already been fully priced in?

The financial crisis hit the home improvement companies especially hard as home sales plummeted. The Home Depot, Inc. (NYSE:HD)’s revenue peaked at $90 billion in 2006, only to fall for three years in a row to $66 billion by in 2009. Lowe’s Companies, Inc. (NYSE:LOW) revenue stagnated during this time, likely helped by the fact that it is a smaller company than its competitor. In 2011 both companies returned to growth, coinciding with the beginning of a rebound in home sales. 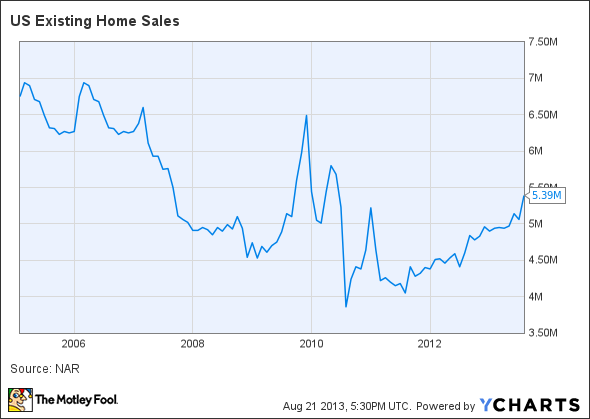 The current rate, 5.39 million new homes annually, is still well below the highs of 2006. But the stocks of both companies have surged since late 2011 to levels well above those during the pre-crash housing boom, even with profits markedly lower. 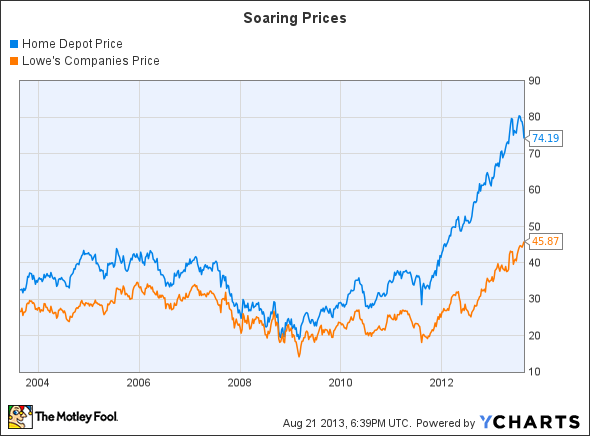 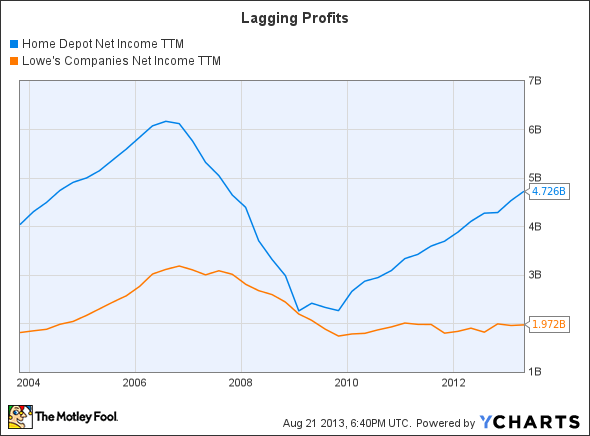 So how is it that the stock prices have rocketed higher with profitability still well below decade highs? Because the full housing recovery, which is still in its early stages, is already being priced in.

The Home Depot, Inc. (NYSE:HD) shares traded as high as $80 in the last month, nearly twice as high as the peak before the financial crisis. Part of this is due to a massive buyback program which saw the share count reduced by about 27% since 2006, pushing per-share earnings in 2012 above those in 2006, even with net income lagging. But this only accounts for part of the price increase.

It seems that the moment housing started to improve, the stock took off and never looked back. Earnings grew far slower than the stock price, resulting in the P/E ratio rising to decade highs. 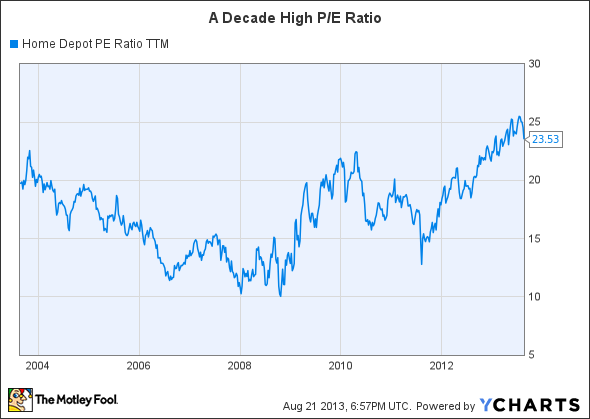 The most recent earnings report seems to justify this, with EPS rising by 22.8% year-over-year on 9.5% revenue growth. Guidance for the full year EPS was raised to $3.60–nearly 20% growth from 2012. This puts the shares at about 20.5 times expected earnings.

One important thing to note is that the share buybacks are responsible for part of the EPS increase. The share count was reduced by 4.5% year-over-year, so net income grew at a slower 17% year-over-year rate.