The Home Depot, Inc. (HD): Does a Massive Share Buyback & a 34 Percent Dividend Boost Make It a Buy?

In February The Home Depot, Inc. (NYSE:HD) announced its full years earnings, with revenue increasing 6.2% to $74.8 billion and earnings increasing 21.5% to $3 per share. Two other significant announcements were made on that day: a 34% increase in the quarterly dividend and a $17 billion share repurchase program expiring at the end of 2015.

A history of returning cash to shareholders

Since 2002 Home Depot has spent $37.5 billion in total on share repurchases, reducing the share count by roughly 1 billion shares. During the same period the company has increased its dividend at an annualized rate of about 20%, growing from $0.21 annually in 2002 to a projected annual payment of $1.56 in 2013. 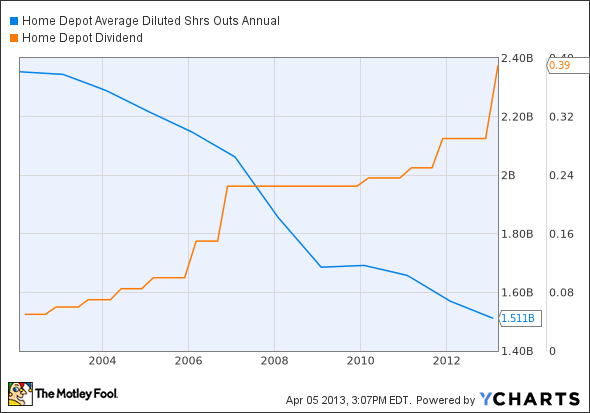 Are these buybacks a good idea?

Share buybacks are a good use of cash only if a company’s shares are undervalued. If a company buys back shares that are overpriced then this money is essentially being wasted. The Home Depot, Inc. (NYSE:HD)’s plan to spend $17 billion over the next 3 years on buybacks is an increase in pace over the past decade, but is it reasonable? Here’s a chart of the TTM P/E ratio since 2002. 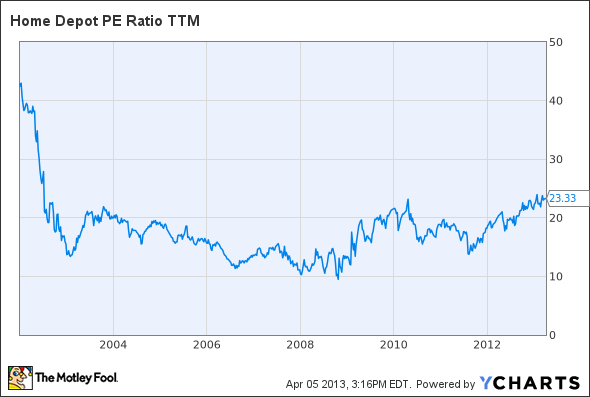 Home Depot stock is more expensive than it’s been in the last ten years. Even during 2006 and 2007, when the company saw rapid revenue growth to $90 billion per year, the stock was trading with the P/E ratio below 15. Based on the above chart of outstanding shares this is the time period in which a large portion of the buybacks occurred. Now, with a P/E ratio of about 23, the company will be paying a much higher price for its own shares.

The buyback will boost EPS, but with the P/E ratio at an elevated level I don’t expect any real benefit from this program. The company has guided for sales growth of 2% in 2013 and EPS growth, including the effect of the buyback program, of 12%. Paying 23 times earnings for 12% growth after being goosed by the buybacks seems pretty expensive to me. Without the effect of buybacks EPS growth would be more like 8%, making the picture look even worse. Hopefully the company picks its moments and only buys shares when the price gets depressed, but I doubt this will happen. All this money for the buybacks would be better spent on increasing the dividend.