In a sign of just how crazy the market has become, stocks were up most of the day as traders on “Fed watch” celebrated some negative economic news. Durable-goods orders fell 7.3% in July, which isn’t good for the economy, but it’s a data point that may keep the Federal Reserve from slowing asset purchases too soon — which the market loves in the short term. However, the markets have since righted themselves: The Dow Jones Industrial Average (INDEXDJX:.DJI) is down 0.29% near the end of trading, and the S&P 500 (INDEXSP:.INX) has lost 0.26%.

Before reading too much into this report, let’s keep in mind that last month was a five-year high point for durable-goods orders, and the data can be choppy from month to month. So the report isn’t such a terrible sign for the economy. But perspective is often lost in the market’s day-to-day swings. 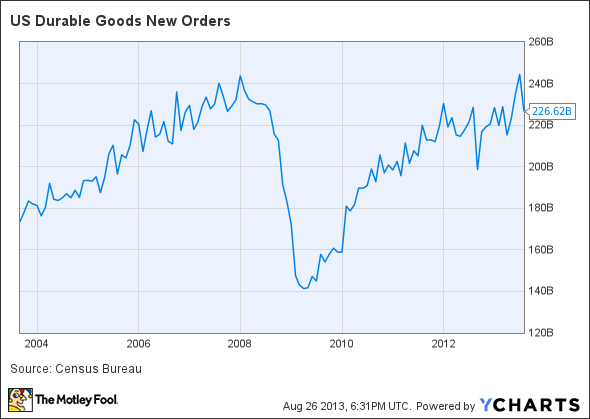 The article Markets Show Delayed Reaction to Bad Economic News originally appeared on Fool.com and is written by Travis Hoium.