It is with good reason that coffee has a second name as black gold. This simple bean powers the most fundamental capital: human capital. Let’s review a few of the most prominent publicly traded players in the coffee competition.

Starbucks Corporation (NASDAQ:SBUX) is a world-renowned coffee shop, but Tim Hortons Inc. (USA) (NYSE:THI) is an up-and-coming player. The latter company does not have the girth of its larger rival — but it does have a well-developed brand, decades of experience, and a small enough size that further expansion into the U.S. market will have a major impact on earnings. In addition to all of these factors, Tim Hortons trades at a more reasonable valuation than Starbucks. 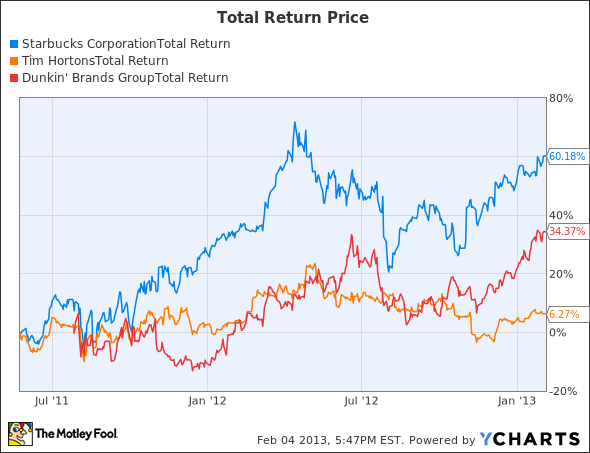 Tim Hortons is a Canadian coffee and quick service restaurant chain with room to expand. Canada is nowhere near the size of the U.S., with a small population around 35 million. As of Jan. 1 of last year, the company had 3,295 restaurants in Canada, and only 714 in the U.S.

In Q3 2012, Canada generated $473.6 million [CAD] in operating income, while its U.S. operations generated $11.8 million [CAD]. In the first three quarters of 2012, the company opened 44 new stores in the U.S. It posted U.S. same-store sales growth of 2.3% in Q3 — 40 basis points higher than Canadian same-store sales growth in the same time period. In Canada, the company is already a dominant firm, and over the coming decade, it will be forced to venture deeper into the U.S. if it wants to achieve significant growth.

The firm has good financials, with a total debt-to-equity ratio of 0.4, a profit margin of 13.1%, and a gross margin of 28.4%. Its ROI of 24.8% is also respectable. The company trades at a P/E ratio of just 19.4, which is cheap considering the positive long-term growth profile.

Tim Hortons has already developed a nationally recognized brand name in Canada, and with determination, it will be able to do the same in the U.S. For long-term investors, Tim Hortons is a good company to watch, as it expands its operations and continues to operate within its core competencies of quality hot food and coffee.

Success can cause many problems and headaches. Starbucks is not in this territory just yet, but over the coming decade, it will have to ask itself a number of hard questions. In 2013, the Americas and Europe, Africa, and the Middle East [EMEA] net store number will grow by 5% while China and Asia Pacific has a goal of 18% unit growth rate.

Asia and China specifically are currently the world’s growth stories. Wages continue to grow, and soon China will soon face competition from other manufacturing centers which are closer to some of the world’s biggest markets. Coupled with negative demographic headwinds, China’s future growth is not as rosy as before.