Dunkin Brands: Does The Valuation Seem Neutral From Here?

Given the recessionary environment its fair to look for those bargain retailers that give us more value for our precious dollars. Hence, we thought to look at Dunkin Brands Group Inc (NASDAQ:DNKN) to investigate if it could provide a great investment bargain. Here we discuss the lack of near-term catalysts for the stock, a rich valuation, and a better way to play the coffee space.

Valuation: Dunkin is trading at $30.82 versus its 52-week range of $23.24-$37.02 and a P/E multiple of 24x its 2012 consensus of $1.26, and a trailing twelve month EBITDA multiple of 17x. The peer group which consists of Starbucks Corporation (NASDAQ:SBUX) and McDonald’s Corporation (NYSE:MCD) are trading at EV/EBITDA multiples of 15x and 10x, respectively. Clearly, Dunkin is trading rich to its coffee counterparts. In addition to its rich valuation, the company has no significant positive catalysts to drive an upside for the stock. Additionally, the stock has had a nice run since its IPO in July 2011, moving up about 90%. 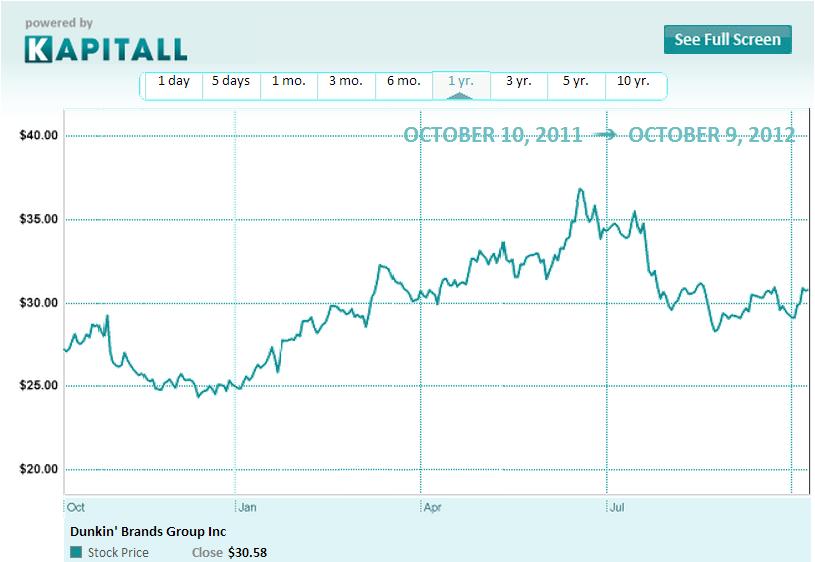 For those looking at other names in the space, we encourage you to look at our report on Starbucks here.

Although there are several catalysts to impact the fundamentals in the long-run, we don’t see any near-term catalysts that could have a significant impact on the stock. To be fair, here are some of the catalysts going forward:

1) Today was a big day for Dunkin as it started selling the new K-cups in California exclusively at the Baskin Robbins stores for use in Keurig brewing machines.  The stock didn’t do much with the news. So although a positive catalyst, not significant enough to provide any upside,

2) Dunkin had been disciplined with cutting costs as it did when one of its drive thru’s had a cost of over $600, 000. This achievement has been priced in the stock with no new immediate plans to cut costs, and

3) Management has stated that the majority of 2013 will be focused on the growth in core and developed markets. This is good news but once again not a short-term significant catalyst for the stock, and lastly,

4) Even today in comparison to Starbucks, Dunkin seems to have a less diversified market base. Competition from Starbucks is tough as SBUX expands into international markets while Dunkin is still struggling to expand its base in the U.S.

Conclusion: There are others in the space to explore when we look at the coffee and donut space. Dunkin needs some significant catalysts to get our attention.

The chart below compares share performance over the past year. “E”s mark earnings reports. 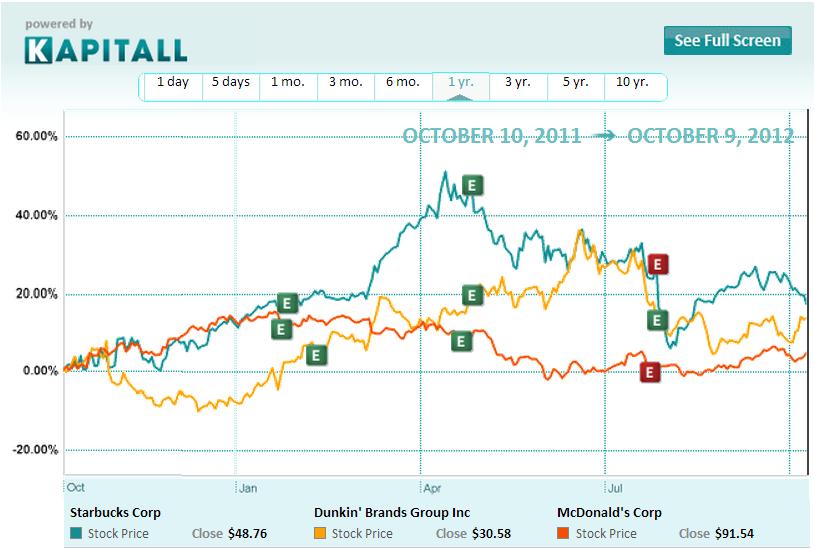 Which Hedge Funds Are Playing The Weather?