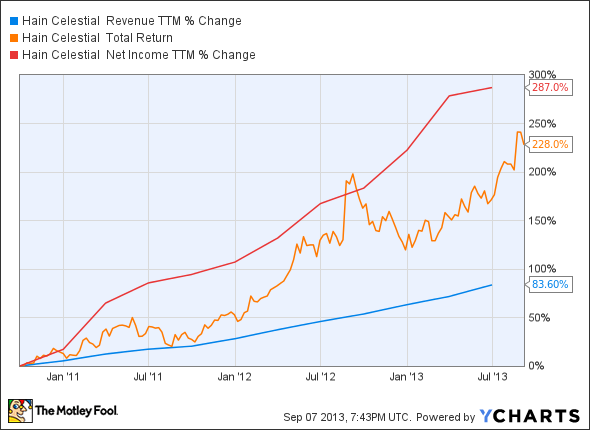 The Hain Celestial Group, Inc. (NASDAQ:HAIN) recently reported results that were better than Street estimates in the fourth-quarter as well. With an aging and health-conscious population being driven toward the concept of organic & natural food for healthier living, Hain’s sales have been pretty strong.

The Rest of the World (ROW), which includes Latin America, Australia and other regions, is expected to grow at a CAGR of 16.5 %. Rising health concerns will be the main driver for growth in the organic food industry globally. The Americas will account for more than 50% of the market.

The Hain Celestial Group, Inc. (NASDAQ:HAIN) has been on a buying binge as it looks to make the most out of the opportunities in the organic food space. Last year it acquired Premier Foods to expand in the United Kingdom; this positioned the company among the top 40 food and beverage suppliers in the U.K.

In May this year, The Hain Celestial Group, Inc. (NASDAQ:HAIN) purchased Ella’s Kitchen Group, a maker of organic baby food with 80 products offered in the United Kingdom, the United States, and Scandinavia. Ella’s posted sales of $70 million in 2012. Now that it’s in control, Hain Celestial looks to increase Ella’s sales to $200 million within a couple of years. Hain Celestial’s acquisitions are known to perform well, and this acquisition is expected to be accretive from 2014 onward.

These expansions are a positive

Organic food and beverages have gained so much popularity across the globe over the past few years that they can now be considered mainstream. Supermarkets such as Wal-Mart Stores, Inc. (NYSE:WMT) carry an ever-increasing range of organic food product lines.

Wal-Mart Stores, Inc. (NYSE:WMT) also increased its focus on the introduction of private label organic products at lower prices, in order to increase their accessibility for consumers. This means that organic food, drinks and personal care products also form a channel of growth for a retail chain like Wal-Mart.

In addition, Wal-Mart Stores, Inc. (NYSE:WMT)’s South African unit, Massmart, plans to take a majority stake in Kenya-based supermarket chain Naivas. This will give Wal-Mart a strong foothold in the fast-growing east African economy. Currently, Naivas operates 28 stores, and plans to add two more by the end of the year.