It seems like ancient history, but it was just 2001, when General Electric Company (NYSE:GE) was the most valuable company in the world, commanding a market capitalization in excess of $500 billion. The quintessential conglomerate, with a presence in almost every part of the global economy, it seemed to have been built to withstand economic shocks and was the choice for conservative investors, scared of the short life cycles and the volatile fortunes of its tech challengers.

Unlike other aging companies like Sears Holdings Corp (OTCMKTS:SHLDQ) that have decayed gradually over decades, GE’s fall from grace has been precipitous , with the rate of decline accelerating the in the last two years. As a new CEO is brought in, with hopes that he will be a savior, it is the right time to both look back and look forward at one of the globe’s most iconic companies.

GE: A Compressed History
GE’s roots can be traced back to Thomas Edison and his invention of the light bulb. The company that Edison founded in 1878, Edison General Electric, was combined with two other electric companies to create General Electric in 1892. The company established its first industrial lab in 1900 and it would not be an exaggeration to say that it revolutionized not just the American home, with its appliances, but changed the way Americans live. For much of of the twentieth century, though, GE remained an appliance company, though it made forays into other businesses. It was in 1980, when Jack Welch became the CEO of the company, that the company started its march towards what it has become today.
The Market History
The first place to start, when looking at GE, is to see how markets have viewed it, over its life. Skipping over the first half of GE’s life, the graph below looks at the growth (and recent decline) of GE’s market capitalization over time: 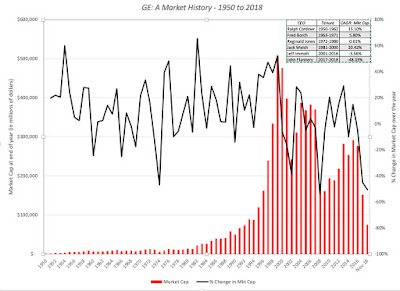 As you can see, GE was a solid but unspectacular investment from 1950 to 1980, and exploded in value in the 1980s and 1990s, with Jack Welch at its helm, and reached its most valuable company in the world status in 2001. Under Jeff Immelt, his successor, the stock continued to do well, but it dropped with the rest of the market as the dot com bubble burst, but then recovered leaving into the 2008 crisis. That crisis was devastating for the company and while it did recover somewhat in the years after, the bottom has clearly dropped out in the last two years, with Jeff Flannery at the top of the company.
The Operating History
To get operating perspective on how the company has evolved over time, we looked at how GE”s key operating metrics (revenues, EBITDA, net income) have evolved since 1950: 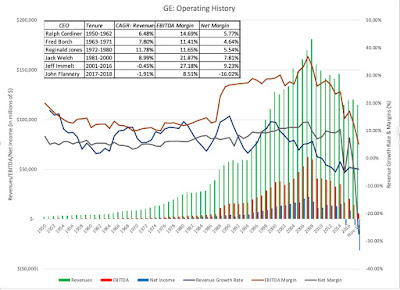 In keeping with our earlier market cap assessment, between 1950 and 1970, GE was a good but not exceptional company, delivering solid revenue growth and decent margins. Under two CEOS, Reginald Jones in the 1970s and Jack Welch in the two decades thereafter, the company transformed itself. Jones helped the company navigate through the turbulent period of high inflation and oil prices, holding margins steady and delivering double digit revenue growth. Welch made himself the stuff of legend, by doubling margins and pushing the company to the top of the market cap ranks by the time he left the firm. His successor Jeff Immelt faced the unenviable task of following Welch, but managed to keep revenues growing and delivered high margins until 2008, when the bottom fell out for the company.