The Dow Bounces Back, Led by a Berkowitz Favorite: Bank of America Corp (BAC)

The Dow is on the rebound today after the ISM Non-Manufacturing index signaled economic expansion. At the halfway point of the trading day, the Dow Jones Industrial Average was up 105 points, or 0.75%, to 13,984. The S&P 500 was up just shy of 1%.

At 10 a.m. EST, the Institute for Supply Management reported that its Non-Manufacturing index fell 0.5 percentage points to 55.2%. That’s down from December’s 55.7% but above analyst expectations of 55%. Any reading higher than 50% indicates economic growth, with higher numbers meaning faster growth. The drop in the index to 55.2% indicates that responders believe the economy is still growing but at a slower rate than in December. 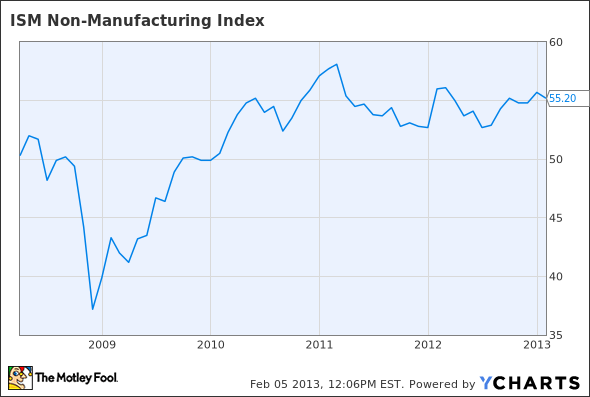 Yesterday’s across-the-board decline was the Dow’s worst performance so far in 2013. The index sank 0.93%, only one of its 30 components escaping the landslide. In stark contrast to yesterday, 28 of the 30 Dow stocks are up today, with only IBM and United Technologies in the red.

Today’s Dow leader
Today’s Dow leader is Bank of America Corp (NYSE:BAC) , up 3.1%. Banks’ financial results are highly dependent upon the health of the economy, so financial stocks are up on today’s relatively positive economic news. Bank of America reported earnings two weeks ago that left much to be desired. The company is still making progress, however, and many investors believe patience will be rewarded. Among them is star mutual-fund manager Bruce Berkowitz, who has a massive position in the company. At the Columbia Student Investment Management Association conference on Friday, Berkowitz laid out his reasons why Bank of America is one of his top three holdings, accounting for almost 9% of his fund.

Berkowitz believes Bank of America has done a great job of taking charges against bad assets and dealing with its numerous other legal problems. With the stock trading below book value and the business improving, Berkowitz thinks he could end up quadrupling his money on Bank of America. On a side note, he thinks just as highly of AIG, which makes up nearly 40% of his portfolio.

In an unusual step for mutual fund managers, Berkowitz closed his fund to new investors last week. Berkowitz believes he will make huge amounts of money on his AIG and Bank of America stakes and doesn’t want his returns diluted by new investors entering the fund.

The article The Dow Bounces Back, Led by a Berkowitz Favorite originally appeared on Fool.com and is written by Dan Dzombak.

Related Insider Monkey Articles
Why Nationstar Mortgage Holdings Inc (NSM) Is Riding High Thanks to Bank of...3 Metrics That Make Bank of America Corp (BAC) A BuyThe Dow Is Falling. Is the Sky Next? Cisco Systems, Inc. (CSCO), Merck &...
The Boeing Company (BA) a Surprise Winner on a Downbeat DayHere’s Why the Media Is Wrong About Bank of America Corp (BAC)Merck & Co., Inc. (MRK): Should You Buy Into This Dow Dividend Dynamo?
Monthly Newsletter Strategy
Download a free copy of our newsletter and see the details inside!
Hedge Fund Resource Center
Billionaire Hedge Funds