The rout turned to a rally yesterday as the Dow Jones Industrial Average (INDEXDJX:.DJI) surged 157 points, marking its second-best day of the year. Beverage maker The Coca-Cola Company (NYSE:KO) drove the bubbly bounce after reporting earnings that beat analyst expectations, which drove its own stock more than 5% higher.

While both the top and bottom lines on The Coca-Cola Company (NYSE:KO)’s financials were below last year’s effort, the above-the-fold numbers were weakened by currency fluctuations and two fewer days of sales in the quarter, while the numbers down below, when adjusted for non-recurring items, actually matched the year-ago results. More important to Wall Street, they came in ahead of predictions.

With plans to develop a more franchise-based relationship with its bottlers, The Coca-Cola Company (NYSE:KO) is looking to reduce direct control over the business but improve margins in the process. That’s a plan PepsiCo, Inc. (NYSE:PEP) is pursuing itself after having purchased its biggest bottler ,and it’s now reorganizing the business. Investors think The Coca-Cola Company (NYSE:KO)’s realignment is a pause that refreshes, and pushed its stock higher.

Reach out and touch someone
Continuing to explode higher has been touch technology specialist UniPixel Inc (NASDAQ:UNXL), which soared more than 16% yesterday after signing on with Eastman Kodak in a manufacturing and supply agreement (and you thought Kodak’s bankruptcy meant it was dead and buried).

The two companies will open a new manufacturing facility in Kodak’s Rochester business park to produce touchscreen sensors based on Uni-Pixel’s UniBoss technology for the touch module market, which is expected to hit $32 billion in the next five years, more than double its current size.

Last month it struck a deal with Texas Instruments Incorporated (NASDAQ:TXN) to produce its UniBoss film that is compatible with the chip maker’s chips, and earlier this month it confirmed it had received a $5 million payment from a PC company for its technology. That it is just an initial payment in what is scheduled to be a series of payments bodes well for continued growth and has been behind its meteoric rise. UniPixel Inc (NASDAQ:UNXL)’s stock is up more than 172% in 2013, but is 600% higher over the last 12 months.

With credible partners like the ones it’s lining up, UniPixel Inc (NASDAQ:UNXL) looks to be a viable challenger to others in its space like Atmel Corporation (NASDAQ:ATML), which is also pursuing metal mesh touch sensor technology.

Supplying growth
Maintenance, repair, and operations is a lot sleepier and a lot less sexier than touch sensors, but W.W. Grainger, Inc. (NYSE:GWW) still makes it an attractive field to invest in nonetheless by exhibiting consistent performance. Yesterday the industrial supplier jumped 7% after reporting earnings that beat analyst expectations and raised its outlook for the rest of 2013.

The surprising strength of W.W. Grainger, Inc. (NYSE:GWW)’s performance is what drove the stock higher, since last week industry peer Fastenal Company (NASDAQ:FAST) reported higher revenues and profits but fell short of expectations in sales. MSC Industrial Direct Co Inc (NYSE:MSM), on the other hand, saw profits fall 7% as demand significantly weakened among its metalworking customers and its stock has fallen by nearly 10% in the past month.

W.W. Grainger, Inc. (NYSE:GWW), though, has long been my preferred MRO specialist and over the long haul has outperformed either of its rivals. 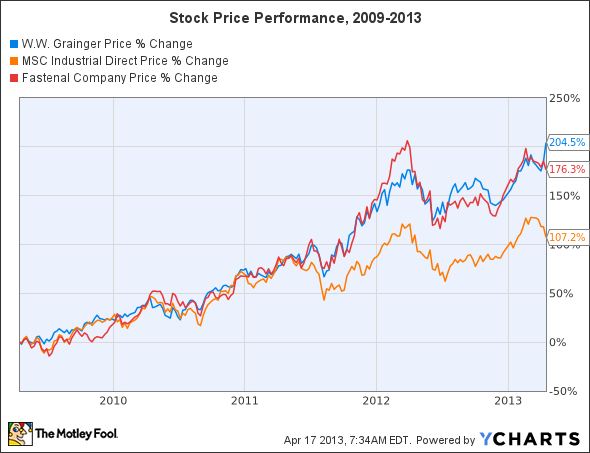 The MRO industry is very fragmented, and while MSC Industrial Direct Co Inc (NYSE:MSM) in particular has made it a point to acquire rivals to add to its growing presence in the field, I expect Grainger, as the industry leader, to remain ahead of its rivals.

The article Coke Refreshes the Dow as These 2 Stocks Bubble Up originally appeared on Fool.com is written by Rich Duprey .