Soft drink giants The Coca-Cola Company (NYSE:KO) and PepsiCo, Inc. (NYSE:PEP) have duked it out for decades for single digit percentage points of market share but a monster is creeping up behind them with a stranglehold on a growing niche beverage market.

Since 2005 soda sales have been slipping and both companies scrambled to find alternative still and sparking beverages with The Coca-Cola Company (NYSE:KO) being the more recalcitrant of the two. It lost Gatorade to PepsiCo, Inc. (NYSE:PEP) thirteen years ago.

Both were reluctant to get into small segment niches as they were the big dogs, global and dominant. Meanwhile, you probably already know the story, a small natural beverage company, Monster Beverage Corp (NASDAQ:MNST) came out in 2002 with its first energy drink. The stock took off and has rarely looked back. Until this year, that is. 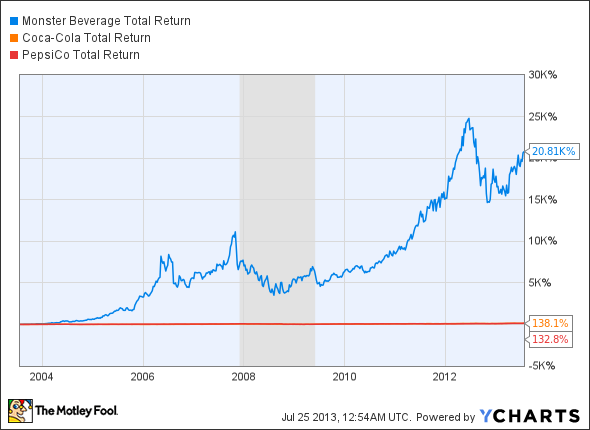 The chart shows me that The Coca-Cola Company (NYSE:KO) and PepsiCo, Inc. (NYSE:PEP)’s storied rivalry has held them back, so intent to gain share against the other that they have practically traded in lockstep.

Their focus on soda and defending the beverage against on onslaught of negative public opinion and  proposed soda bans hasn’t stemmed the trend to decreasing consumption year after year.

Even after the monster gains at Monster neither of the big soda companies have supported their energy drinks with much promotion or marketing instead trying to bump up diet soda sales by trying alternative sweeteners like stevia. That hasn’t worked so well as diet soda sales have also declined according to The Wall Street Journal.

In the energy drink space the prime position is still held by privately held Red Bull which sold $2.9 billion worth of the drinks in 2012. Closely following was Monster Beverage Corp (NASDAQ:MNST) which sold $2.6 billion of energy drinks and lagging far behind were the energy drinks Amp (PepsiCo, Inc. (NYSE:PEP)) at $300 million, and The Coca-Cola Company (NYSE:KO)’s Nos and Full Throttle at $250 and $140 million, respectively.

Market Line reports that globally, energy drinks comprise 58% of market share of functional drinks (sports drinks and energy drinks) with global sales of $39 billion by 2014. While PepsiCo, Inc. (NYSE:PEP) is the acknowledged leader in sports drinks with its Gatorade, Monster Beverage Corp (NASDAQ:MNST) is the publicly traded leader in energy drinks.

The dog ate my homework and other excuses

The Coca-Cola Company (NYSE:KO) reported disappointing Q2 earnings on July 16 blaming the weather. While usually that excuse is as lame as the dog ate my homework this time other beverage companies like ImBev, the giant beer company, also claimed weather impact on sales. The Coca-Cola Company (NYSE:KO) reported EPS of $0.59 down from $0.61 in Q2 2012 and revenue declined to $12.75 billion.

PepsiCo, Inc. (NYSE:PEP)’s earnings were better with their snack and food division offsetting decreasing soda sales. They also reported good numbers in emerging markets where soda sales haven’t declined as in the US, especially in Asia, Middle East, and Africa with a 14% gain in organic revenue.

CEO Indra Nooyi said, “Importantly in the second quarter, we increased both gross margins and operating margins by more than 100 basis points.”

The company also guided for 7% core constant currency EPS growth for 2013 and reaffirmed $6.4 billion would be returned to shareholders in the form of dividends and buybacks. PepsiCo has a yield of 2.60%  and trades at a 21.92 trailing P/E with a 2.30 PEG.