The Coca-Cola Company (KO): How Dividends Change the Game for This Stock

If you want to see what a true dividend aristocrat looks like, take a peek at this The Coca-Cola Company (NYSE:KO) chart: 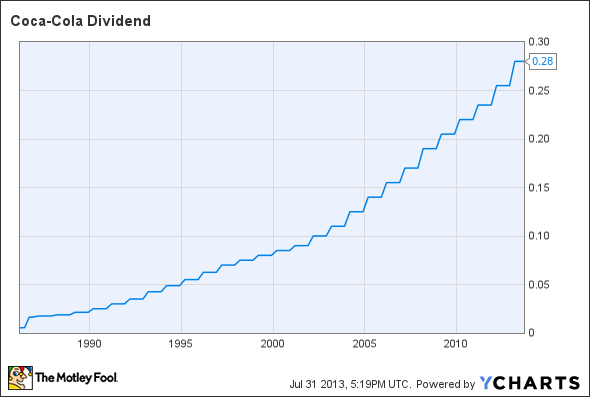 Coke has paid quarterly dividends since 1920 (coming up on the centennial anniversary in a few years) and grown the checks in each of the last 50 years. And the increases aren’t small, either. The 25-year chart above depicts a 5,070% rise in dividend payouts. No, that’s not a typo.

That’s exactly the kind of dependable dividend increases that make long-term income investors a little hot under the collar. Buy Coke stock once, reinvest every dividend check in more The Coca-Cola Company (NYSE:KO) shares, and enjoy a rock-solid income stream in your golden years.

The Coke stock is no slouch when it comes to rising share prices over the long term, but dividends still make a world of difference. In the last 25 years, reinvested dividends would have nearly doubled your already market-beating returns. Either way, The Coca-Cola Company (NYSE:KO) leaves its average Dow Jones Industrial Average (Dow Jones Indices:.DJI) peers far behind: 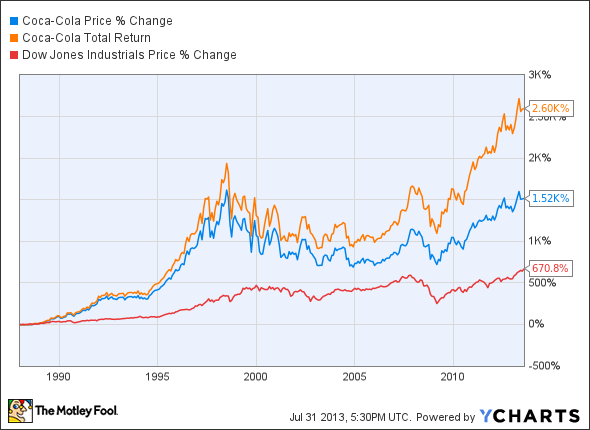 Past performance is of course no guarantee of future returns. That old adage is just as true for dividend policies as it is for share prices. That being said, I see little reason to worry about Coca-Cola abandoning its shareholder-friendly ways.

The Coca-Cola Company (NYSE:KO)’s dividends have grown in a wide variety of environments. We’re talking about wars, recessions, and the good times too, all without slowing down the payout increases. Not even the New Coke debacle could put a stop to the quarterly checks.

But Coke has always left enough headroom over its dividend policies to account for these setbacks. The smallest annual dividend increase during these years was 6.8% in 2011, when both earnings and cash flows fell. Even now, The Coca-Cola Company (NYSE:KO) spends just 60% of its free cash flow on dividend checks.

It’s admittedly one of the highest such ratios in the Dow Jones Industrial Average (Dow Jones Indices:.DJI), but it still leaves plenty of wiggle room to spare as management looks to kick-start the stalled revenue growth engines. The next stage includes big investments in the developing world. When that bet starts to pay off, the dividend payout ratios will fall back down again. In the meantime, there’s no reason to pump the brakes on payout policy growth and lose that coveted dividend aristocrat status.

The article How Dividends Change the Game for Coca-Cola Stock originally appeared on Fool.com and is written by Anders Bylund.

Fool contributor Anders Bylund holds no position in any company mentioned. He did enjoy an ice-cold can of Coke while writing this article. Check out Anders’ bio and holdings or follow him on Twitter and Google+. Motley Fool newsletter services have recommended buying shares of Coca-Cola. The Motley Fool has a disclosure policy. We Fools may not all hold the same opinions, but we all believe that considering a diverse range of insights makes us better investors.